Wind of Change: Iran’s Kurdish Women Have Had Enough 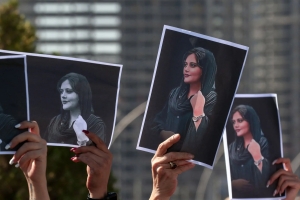 Nationalinterest.org by Ala Riani Rezan Labady

Protests in the wake of Jina Mahsa Amini’s murder are not simply driven by compulsory hijab, but by the Islamic Republic’s decades of repression in Iranian Kurdistan.

A wind of change is blowing through Iran. This wind picked up after the murder of Jina Mahsa Amini, the young Kurdish woman who was arrested by the Iranian morality police because a few strands of her hair were visible under the compulsory hijab. She was only twenty-two years old.

When her body was taken back to her hometown of Saqez in the Kurdistan province in northwest Iran, the regime ordered her funeral to be carried out in secret. However, it quickly turned into a protest. Brave Kurdish women removed their headscarves, and the crowd cried out anti-government utterances, chanting for Kurdistan and the well-cited Kurdish slogan "Women, life, freedom," which was coined by the Kurdistan Workers Party (PKK) and cemented by the Women’s Protection Units (YPJ) when fighting ISIS in Rojava.

The protest at Jina’s burial spread like wildfire throughout the Kurdish cities, with people taking to the streets shouting anti-regime slogans. A general strike throughout Kurdistan was carried out.

It didn’t take long until the protests also spread to Tehran and the rest of the country. Jina’s flame may have been extinguished, but it has lit a revolutionary spark among the people of Iran.

On September 24, the small Kurdish city of Shino managed to oust regime forces, who withdrew when they lost control of the city. The protesters on the streets were chanting for the return of the Democratic Party of Iranian Kurdistan (PDKI), a political party that was forced to leave the country in the 1980s after Ayatollah Khomeini brutally crushed the Kurdish freedom movement, a declaration of war against Iranian Kurdistan and one of the bloodiest chapters in the regime’s history. However, the human rights organization Hengaw reports that security forces have now taken back control and completely militarized the town of Shino. The city has gone on strike while security forces violently arrest protesters, sometimes outside of pharmacies where anyone purchasing first aid is detained and forced to identify the injured individuals. The internet is down, and at least five have been reported dead at the time of writing.

It took Iran only days to retaliate against the protests by attacking the Iranian Kurdish opposition parties based in Iraqi Kurdistan. Drones and artillery strikes hit a school, a hospital, homes, and party bases, with several casualties reported, including a pregnant woman who leaves a newborn behind.

Despite its spread across the nation, the Iranian regime knows that the final outcome of the protests is linked with the outcome in this province. The country’s protests were ignited in the cities of Iranian Kurdistan, and the country’s protests can also die out if the regime stifles Kurdistan and crushes the protests there. The regime realizes the important role the Kurds have in the protests and is now using this particular tactic to end the countrywide uprising. Its aim is to morally weaken the Kurds in Iran. Furthermore, by bombing Iranian Kurdish opposition parties and their civilians, the regime is sending a warning not to engage in the country’s affairs.

The protests, however, are lingering. Women and men bravely stand side-by-side and face ruthless police brutality. They demand the overthrow of a regime that has seized their rights to dignified lives in liberty. Hijabs are burned, flagpoles are overturned, and pictures of Ayatollah Khamenei are torn down while chanting "Death to the Islamic Republic" and "Kurdistan Kurdistan, Iran’s eyes and light".

This has ignited a glimmer of cautious hope among the Kurdish population that the rest of Iran finally appears to be in solidarity with the Kurdish people’s ceaseless struggle against oppression and injustice. For the Kurds, this symbolizes a political recognition that is long overdue. This is the time that the Iranian people collectively can acknowledge the country’s dark history as well as the present systematic policies against Kurds and their struggle against a dictatorship.

It appears that the people of Iran have had enough. The brutal tyranny of the Islamic Republic of Iran extends to everyone with a foundation that is built upon discrimination, censorship, and restrictions. Tens of thousands of people jailed in Iran are advocating for democracy and the rights of women and ethnic minorities. Women in Iran are second-class citizens who are banned from singing, prohibited from traveling without the consent of a male relative, and forced to hide their hair and bodies under a compulsory hijab and other clothing.

When the compulsory hijab requirement was set in place in 1979, Kurdish women resisted for as long as they could, taking the regime more than a year to enforce it in Kurdistan.

Kurds in Iran are and have been subjected to ethnic, cultural, and religious oppression ever since the West carved up countries and borders after the fall of the Ottoman Empire. Assimilation, forced displacements, and mass executions are part of Kurdish history in Iran. According to a 2019 United Nations report, Kurds make up almost half of Iran’s political prisoners and the number of Kurds sentenced to death is disproportionately high. The Kurdish language is still banned in schools and government institutions; there is a permanent state of emergency in place in Kurdish areas. Kurdish cities have been systematically starved of resources and opportunities which has led to sky-high levels of unemployment, poverty, and illiteracy, forcing many Kurds to become kolbar, a name for those who carry goods over the mountainous borders to Iraqi Kurdistan. This is a dangerous trade that carries the risk of either being shot by regime forces or freezing to death.

Additionally, Iranian Kurdistan is one of the most neglected areas in the world when it comes to international media coverage. The Kurdish resistance movement in Iran has always been carried out without proper acknowledgment from the outside world; 10 million people remain unseen and without political status.

The regime has shut down the internet in Tehran and Kurdistan for several days. Past experiences tell us that this means covering up bloodshed. The crackdowns on the protesters are brutal as arbitrary arrests and the number of dead keep rising. The regime uses live ammunition and Jina’s hometown is among the worst affected.

Hence, leaving ethnicity out of the context is a betrayal. It is not a contradiction to support the struggle of the Kurdish and Iranian peoples at the same time—it is solidarity. It must be acknowledged that this revolution, which was started by the death of a young Kurdish woman, is being remembered with a name that was not hers but that had been sanctioned by the regime. Mahsa was her Iranian name but Jina was her forbidden Kurdish name, meaning “life.” Jina was the name that her mother cried out by her daughter’s grave.

In this context the Kurdish woman in Iran is not only the second sex, she is also a third-class citizen. She is oppressed by the patriarchal structures in her home and in society as well as by the regime. The fact that she is Kurdish adds another layer to her already heavy burden.

The world can no longer turn a blind eye to the fact that the Kurds constitute their own identity. The injustice of Jina’s death caused Kurdistan a roaring pain so deep that it echoes throughout Iran and has now brought its people closer in their common yearning to rectify years of grief, frustration, and totalitarianism.

A wind of change is blowing over Iran and Kurdistan. A wind that sweeps away women’s compulsory hijab. A wind that frees prisoners of conscience. A wind that caresses the memory of all executed victims. A wind that heals us all. A wind that chokes the breath of the Islamic Republic.

Let it whip up a storm where the words echo across the world. Women, Life, Freedom! Jin, Jîyan, Azadî!

Ala Riani is an actress and activist.

Rezan Labady is an activist.