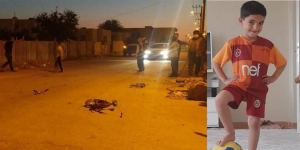 On June 7, 2016, 6-year-old Bünyamin Bayram was hit by an armored vehicle and lost his life in Cizre district in Şırnak.

On July 24, 2016, 4-year-old Taha Kılıç, who was run over by an armored vehicle in front of the İpekyolu District Security Directorate in central Van province, lost his life.

On February 9, 2017, 7-year-old Berfin Dilek lost her life after being hit by an armored police vehicle in Mardin's Dargeçit.

On August 2, 2018, 7-year-old Raşid Oso from Syria was hit by an armored vehicle and lost his life in İstanbul's Okmeydanı.

On September 13, 2019, 6-year-old Efe Tektekin, who was run over by an armored vehicle that was underway on Emek Street, lost his life in central Bağlar district in Diyarbakır province.

On October 19, 2017, 6-year-old Felek Baturlost his life after being hit by an armored vehicle in Siirt's Çal Neighborhood.

According to the June 2019 report of the Human Rights Association (İHD) Diyarbakır Branch, at least 63 armored vehicle crashes took place between the years of 2009 and 2019.

In writing this article, I have only cited the names of the children whose passing was documented in that report. Last Friday (September 3), another name, that of Mihraç Miroğlu, was added to the list.

Mihraç lived in Şırnak. While he was riding his bike on the street where he lived, he was hit by an armored vehicle and lost his life.

If you are to ask about the legal proceedings about these deaths, let me summarize them in one word: Impunity...

Let me give you a concrete example...

In 2017, again in Silopi in Turkey's Kurdish-majority Şırnak province for some reason, an armored vehicle hit a house and caused the death of 7-year-old Muhammed Yıldırım and 6-year-old Furkan Yıldırım.

In the trial over the death of the children, armored vehicle's driver and police officer Ö.Y. and his superior M.M. had their 8th and final hearing at the Cizre 2nd Heavy Penal Court on May 2, 2019.

At the hearing, the lawyers of the Yıldırım Family were lashing out... At the justice that was not served and at the report that concluded that the police officers had been "partly negligent at the lower limit"...

Striking remarks were made by defendant police officer Ö.Y. at the hearing. Ö.Y. said that he was back on his duty and requested that his supervised release be lifted. The court accepted his request and lifted his obligation to give a signature as part of judicial control measures.

Yes, the officers who were put on trial for causing the death of Muhammed and Furkan are free today, just as they were yesterday..

There is still no clear information about the officers who were driving the armored vehicle that caused the death of Mihraç.

We will wait and see, we will follow it up.

Otherwise, we will be unable to do anything more than what Nazım Hikmet once wrote in one of his poems:

"let's give the world to the children
at least for one day let the world learn friendship
children will get the world from our hands
they'll plant immortal trees..."