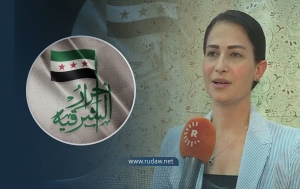 ERBIL, Kurdistan Region — The United States Treasury Department on Wednesday sanctioned a Turkish-backed Syrian militia group accused of assassinating Kurdish female politician Hevrin Khalaf in 2019. The head of her party said the sanctions are a step towards bringing her killers to justice.

The Ahrar al-Sharqiya militia “has committed numerous crimes against civilians, particularly Syrian Kurds, including unlawful killings, abductions, torture, and seizures of private property. The group has also incorporated former Islamic State of Iraq and Syria (ISIS) members into its ranks. These horrific acts compound the suffering of a population that has repeatedly endured mass displacement,” read a Treasury statement.

Two of the militia’s leaders were also sanctioned for “abuses against civilians.”

The militia is accused of assassinating Khalaf, who was the secretary general of the Future Syria Party, in October 2019 during Turkey’s military offensive against the Kurdish-led Syrian Democratic Forces (SDF) in northern Syria.

The Treasury said the militia has “a record of human rights abuse that includes the unlawful killing of Hevrin Khalaf.”

The president of Khalaf’s party, Ibrahim al-Qaftan, told Rudaw English they welcome the sanctions, but wish they had gone further.

“Definitely, this decision is seen as a positive move by the members of the Future Syria Party, as well as the international community. It is a gateway to chase these killers,” he said. But he would like to see the US also sanction Ahrar al-Sharqiya’s supporters, “namely the Turkish government.”

“We have always called on the international community and human rights organizations to prosecute these killers – who are led by Turkish defense minister [Hulusi Akar], Turkish President [Recep Tayyip] Erdogan, and the [former] head of the Syrian coalition Nasr Hariri,” Qaftan said.

He claimed that Erdogan had met with the militants days before Khalaf was killed.

Khalaf, who was known for her leadership on women’s rights and uniting various Syrian groups, was brutally killed on the road between Qamishli and Manbij. According to an autopsy report, she was dragged by her hair, causing her scalp to tear, and had her leg broken before she was shot multiple times.

Her murder occurred during Turkey’s invasion of areas of northern Rojava, Sari Kani (Ras al-Ain) and Gire Spi (Tal Abyad), in 2019. The military offensive forced the displacement of hundreds of thousands of people and led to scores of human rights abuses.

The new US sanctions also include individuals and entities affiliated to the regime, such as its intelligence and prisons.