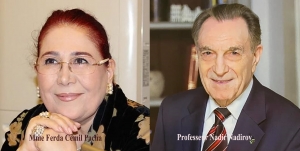 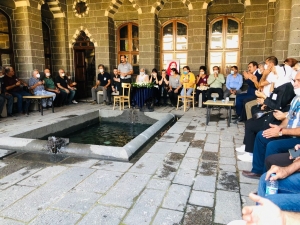 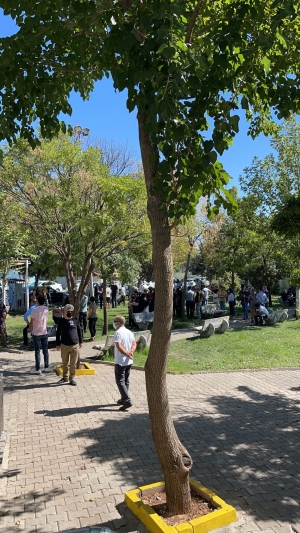 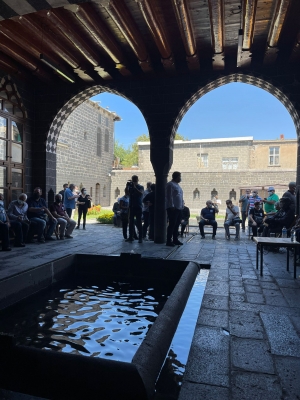 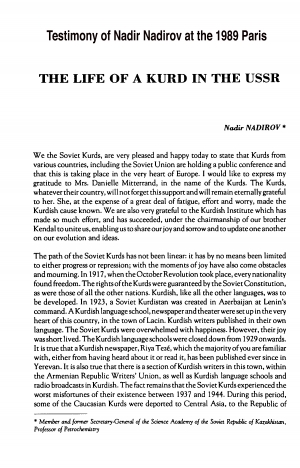 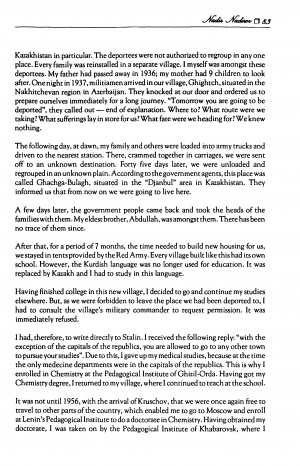 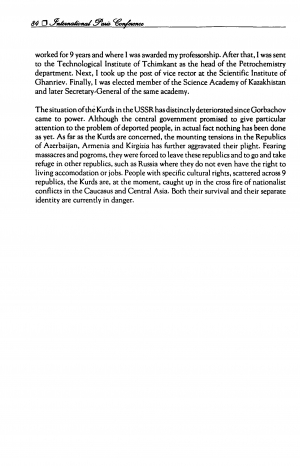 We are deeply saddened to announce the death of two eminent personalities of the Kurdish world: Mrs. Ferda Cemil Pacha, on August 31 in Istanbul and Professor Nadir Nadirov, on August 24 in Almaty, Kazakhstan.

Long-time friends and partners, both were known and appreciated in the Kurdish community in France and among the friends of the Kurdish Institute.

A figure of civil society and feminism in Kurdistan, Ferda Cemil Pacha was also a patron of the arts and a pioneer entrepreneur who contributed to the reconstruction of Kurdistan.  Her companies built the Ministry of Culture, the Ministry of Interior, the Police Academy and several hospitals in Erbil.  A committed humanitarian activist, she was distinguished and rewarded by the United Nations High Commissioner for Refugees for her numerous initiatives in welcoming Iranian, Afghan and later Iraqi Kurdish refugees to Turkey. In parallel to her professional activities, she has continued her aid and solidarity actions in favor of Syrian Kurdish and Yezidi refugees in Iraqi Kurdistan.  A close partner of the Institute, she was from 2007 to 2012 director of the Erbil office of our Kurdish cultural TV channel KURD1 and as such very much appreciated by local artists and intellectuals.

Her career reflects the vicissitudes of Kurdish history in the 20th century.  She was born in 1951 in Damascus, in exile, into an aristocratic Kurdish family that played a leading role in the Kurdish national movement in the years 1910-1930.  His great-grandfather, Cemil Pasha, was a high-ranking Ottoman dignitary who served as governor of Yemen, among other positions.   His children, educated in the best schools in Istanbul and Switzerland, became Kurdish nationalists advocating, in the aftermath of the Great War, for the creation of an independent Kurdistan.  After the victory of Mustafa Kemal, they had to leave their city of Diyarbakir and go into exile in Syria, then under the French mandate, where they continued their fight for the Kurdish cause.

All their properties were confiscated.  It was only in the early 1970s that, thanks to a short-lived period of liberalization of the Turkish regime, some members of their family, including Ferda's father, were allowed to return to Turkey.  It was in Diyarbakir that Ferda was able to finish high school before going on to study biology at Haceteppe University in Ankara, which she successfully completed in 1980.  Her militant activity in favor of the Kurdish cause and feminism, started during her university years, continued under the military dictatorship in clandestinity, until her premature death at the age of 70, in a hospital in Istanbul.

Polyglot, fluent in Arabic, English and Persian in addition to Kurdish and Turkish, generous and supportive, she was loved and respected in Kurdistan and among Turkish and Syrian democrats and beyond among the many Westerners, including French, passing through Erbil who crossed her path.

Her funeral took place on September 2 in her beloved city of Diyarbakir in the main courtyard of the Cemil Pasha Palace, which was their residence and which her family donated to the Diyarbakir City Hall, which turned it into a museum.

"THE MARSHAL OF GAS AND OIL

Professor Nadir Nadirov was the most famous figure of the Kurds of the former USSR symbolizing, through his life, the destiny of his community.

Born on 6 January 1932 in the village of Qirqac in Nakhchivan, now part of Azerbaijan, to a family from Van who had fled Turkish persecution, he was deported at the age of 5.  His family, like tens of thousands of Muslim Kurdish families in the Caucasus, was deported by Stalin's regime to Central Asia.  After some time of wandering, she settled in the Kazakh city of Jambul.  Despite innumerable difficulties hindering the education of the children of the deportees, he managed to finish his secondary education.  After the death of Stalin and the end of his regime of terror, the situation improved and this brilliant student was allowed to study chemistry at Moscow University and earned a PhD in petrochemistry. In 1970 he became a university professor in Alma Ata, Kazakhstan, later becoming a member of the Academy of Sciences. His research, which has resulted in the publication of some thirty books and several hundred scientific articles, has earned him several Soviet and foreign awards. He is credited with eight technical innovations and more than 200 patents.  In 1993, he was appointed vice-president of the Academy of Sciences of Kazakhstan and called "Marshal of gas and oil" by the then Kazakh president Kunaev.

In parallel with his scientific activities, Professor Nadirov, who as a young student of 23 years had been able to meet in Moscow the legendary Kurdish leader in exile, Mustafa Barzani, pursued activities first in favour of the proper integration of the Kurds in Kazakhstan, then in favour of the recognition of a status for the Kurdish diaspora in the USSR and for the taking into account of the Kurdish national liberation struggle by Soviet diplomacy.

In October 1989, he came to Paris at the head of a large Soviet delegation to take part in the International Conference on the Kurds organized by the Kurdish Institute and the France-Libertés Foundation at the International Conference Centre with the participation of personalities from 32 countries, including senator Claiborne PELL, head of Senate’s Foreign Relations Committee British and German parliamentarians. His testimony on the fate of the Kurds in the USSR, their deportation, their ordeals, was one of the outstanding events of this conference which contributed to the internationalization of the Kurdish question.

On his return, he played a key role in the holding of a major conference in Moscow in July 1990, co-organized by the Institute of Marxism-Leninism of the CPSU and the Kurdish Institute of Paris. Nearly 1,400 Kurdish delegates from nine Soviet republics and some 20 political leaders and personalities from Kurdistan took part in this event, which was unprecedented in Soviet history.  The official objective was the definition of a status for the Kurds of the USSR.  Nadir Nadirov and a majority of the delegates demanded the recognition of a cultural autonomy including linguistic rights such as the teaching of the Kurdish language in schools, broadcasts in Kurdish on the radio, etc. Other delegates also demanded the re-establishment of an autonomous Kurdistan in the territories of Latchine and Kelbajar located between Armenia and Nagorno-Karabakh, where from 1922 to 1929 a Red Kurdistan had existed.  Advisors to President Gorbachev who were attending the Conference later received a delegation from the Conference chaired by Nadir Nadirov.  They promised to study the various proposals of the Conference. But the collapse of the USSR a few months later took away all the projects.

In the aftermath of the Conference, the Soviet President's foreign policy advisor, Yevgeny Primakov, who later became Prime Minister, received the Iraqi Kurdish leaders present in Moscow at length.  According to observers, this contact had an important impact on Soviet policy during the Gulf War and especially during the mass exodus of Kurds that followed it.  Contrary to their tradition, the Soviets did not veto the adoption of Security Council Resolution 688, proposed by France, authorizing the creation of a "non fly zone" in Iraqi Kurdistan, a zone which evolved into the present Kurdistan Region.

National glory in Kazakhstan, Professor Nadirov was known and respected as a patriotic scholar in all regions of Kurdistan and in the Kurdish diaspora.  His death at the age of 89 was widely reported in Kazakhstan, where former President Nazarbaev and his successor President Kassimov paid tribute to him.  The local media, which gave wide coverage to the event, also reported proposals to name research institutions after him, as well as streets and squares in Almaty and his childhood town of Jambul. In Kurdistan, President Nechirvan Barzani, his predecessor Massoud Barzani, the Prime Minister, as well as the leaders of the main Kurdish political parties and intellectuals have issued messages honoring his memory, his work and his commitment to the Kurdish cause.  The President of the Kurdish Institute and several of our colleagues took part in Kurdish television programmes paying tribute to Professor Nadirov who considered our Institute as "An embassy of Kurdistan and all Kurds in the heart of Europe".

Nadir Nadirov was married to Mrs. Helima Amo, a Kurdish chemist who had a brilliant academic career. In addition to her professional publications, a few years ago she published a reference book on Kurdish cuisine.  Their three children remain active in the cultural and social life of the Kurds of Central Asia.