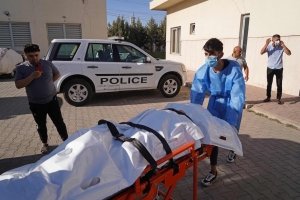 Medics transport the body of a victim following Turkish shelling in the city of Zakhu in the north of Iraq's autonomous Kurdish region on July 20. (Ismael Adnan/AFP/Getty Images)

Videos from the scene of the attack showed a summertime idyll destroyed. Shortly before the strike, families had been gathered by a pool, taking a dip or resting in the dappled shade.

When the shelling began, screams filled the air beneath a canopy of vines. Parents grabbed their children and ran.

Turkey has been conducting military operations against militants from the Kurdistan Workers’ Party, or PKK, in Iraq’s northern mountains for years. The group has fought a decades-long war for autonomy for Turkey’s ethnic Kurdish minority — but civilian casualties on this scale are believed to be rare.

Who are the Kurds, and why is Turkey attacking them?

Wednesday’s strike on the Barakh resort area of Zakhu came as thousands of Iraqis took refuge from the summer heat in Kurdistan’s mountains. Many of the dead and wounded were from the country’s predominantly Arab federal region, where temperatures reached 122 degrees Fahrenheit (50 Celsius) this week.

In an interview broadcast by the Kurdish television network Rudaw, an eyewitness visiting from the capital, Baghdad, said tendrils of smoke had been visible farther up the mountain from the window of his tourist bus as he arrived in Barakh.

“We asked our tour guide, but they said it was normal,” he said. About 15 minutes later, four or five strikes landed amid the gathered families, he said. A young boy’s hand was severed. An old man lost two daughters. In addition to the eight dead, at least 28 people were wounded.

The PKK is listed as a terrorist organization by Turkey, the United States and the European Union. Turkey, where millions of Kurds live in the southeastern part of the country bordering Iraq and Syria, has spent decades fighting a low-level war with the PKK, leaving tens of thousands dead.

The militants have operated in Iraq’s Kurdistan region for decades, and have historically been viewed as a political and security threat by the area’s ruling Kurdish parties. But in practice, neither has the capacity to oust them. Turkey has instead been allowed to operate dozens of military bases inside Iraq from which to target the group.

In a statement Wednesday, the Kurdistan region’s Council of Ministers condemned the strike and urged Iraq’s federal government, based in Baghdad, and the international community to do more to prevent attacks.

For its part, the United Nations condemned the attack and urged an investigation, but it did not mention Turkey in its statement. The U.S. State Department said it was monitoring the situation.

As night fell, dozens of protesters were gathered in protest outside the Turkish Embassy in Baghdad. Condemnations were scrawled in spray paint across Turkish bureaucratic offices in several of Iraq’s southern cities. On social media, a trending hashtag referenced a quotation from Saddam Hussein that likened Turkey, unfavorably, to one of Iraq’s other powerful neighbors, Iran.

In a statement hours later, Turkey condemned the strikes and suggested that only a “terrorist organization” could be responsible. It called for an investigation.

Turkey “carries out its fight against terrorism in accordance with international law, with utmost sensitivity to the protection of civilians,” it said.

“We invite Iraqi government officials not to make statements under the influence of the rhetoric and propaganda of the treacherous terrorist organization and to cooperate in bringing the real perpetrators of this tragic incident into light,” it added.

Human rights groups have urged Turkey to do more to protect civilians during its attacks on Kurdish militants. Since the start of the year, civilian casualty monitoring group Airwars has recorded scores of potential civilian casualties from alleged Turkish strikes in Iraq using artillery and airdropped munitions.

Ankara has pressed Baghdad to uproot the PKK from the Kurdistan region. Iraq, in turn, has described Turkish attacks as being in breach of its sovereignty.

“This brutal attack underscores the fact that Turkey ignored Iraq’s continuous demands to refrain from military violations against Iraqi territory and the lives of its people,” Prime Minister Mustafa al-Kadhimi said Wednesday in a statement.

President Barham Salih wrote on Twitter that he “condemned and denounced” the attack.

Dulsher Abdulsattar, an official from the Zakhu region, said the area had been shelled seven times in three months, but never near any gatherings of civilians.

“People are terrified; they came for tourism, but they were bombed instead,” he said, reached by phone in a hospital as doctors treated the casualties. “Are there PKK in the mountains? Of course. But here they bombed a tourist area.”

Kareem Fahim in Istanbul contributed to this report.