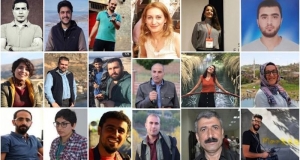 During the raids, police officers seized computers, hard drives and other work equipment from the journalists’ houses and media offices.

Since the 8th of June, 21 journalists have been under custody in Diyarbakır. They have been kept in one-person cells without air conditioning. Our colleagues are even prevented from accessing toilettes. Set our friends free!@EFJEUROPE @IFJGlobal pic.twitter.com/5YQu6tclsV

Journalism is not terrorism

The Turkish authorities have disclosed no further information about the investigation, prompting a backlash from human rights groups and journalists' unions over the lack of transparency.

The arrested journalists announced they willcontinue working from their cells.

“The economic crisis is deepening, there are military operations in the works, and the presidential and parliamentary elections process for next year has started. Journalists follow these and report on them, that may be the reason for their detention,” said Dicle Fırat Journalists Association co-chair Serdar Altan, who is among the 21 who were arrested. Journalists will not be silenced with such arrests”, he added.

IFJ General Secretary, Anthony Bellanger, said: “Turkish authorities continue to crack down on journalists, accusing them of practising terrorism. The IFJ strongly opposes these arrests and stands in solidarity with all Kurdish media workers currently in prison for doing their job. We call for their immediate release and the return of all confiscated work material. Journalism is not terrorism.”