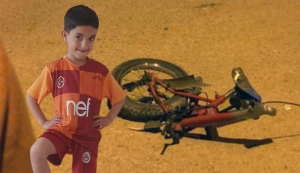 Mihrac Miroglu, 7, was hit by an armoured vehicle while riding his bicycle in front of his house in Idil, Sirnak province on Friday night. He died shortly after. The incident angered Kurds who took to social media, condemning it and using a hashtag of the boy’s name: #MihracMiroglu.

The suspect in the case gave his testimony and then was released, Mezopotamya news agency reported on Monday, adding that the public prosecutor’s investigation has described the incident as a “fatal traffic accident.”

The police officer in his testimony denied that he was speeding. "I didn't do it on purpose. I did not want it to end like this,” the news outlet quotes him as saying.

Rojhat Dilsiz, the head of Sirnak Bar Association who has met with the Miroglu family, told Rudaw's Medine Kilic on Monday that the suspect was never arrested, but released after making a statement.

“He has never been in custody. After the incident, he took the child to the hospital. I was also told that he attended the funeral. However, we do not consider this case in isolation. Since there have been many deaths recently, especially due to armored vehicle crashes,” he said, calling for a “healthy investigation” so the perpetrator is held responsible.

The seven-year-old boy’s death was labeled a hate crime and “massacre” against Kurds by the pro-Kurdish Peoples’ Democratic Party (HDP), which said “deaths involving security forces and the vehicles they use in Kurdish provinces are not accidents.”

According to a 2019 report by Human Rights Association (IHD), 36 people lost their lives in at least 63 incidents caused by armored vehicles in southeast Turkey in the previous ten years. This includes 16 children and six women.

Twitter users have blamed the Turkish government for Mihrac’s death and called for an end to brutality against the country’s Kurdish population.

There has been a string of attacks on Kurds and the HDP this year. Seven members of a Kurdish family were brutally killed in Konya province on July 30. A 43-year-old Kurd was also killed in the same district on July 21. Deniz Poyraz, the daughter of an HDP official, was killed when the party’s office in Izmir came under attack in mid-June.