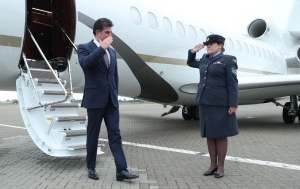 During his stay he is expected to meet British officials, among them Prime Minister Boris Johnson and the ministers of defense and foreign affairs.

The purpose of the visit it to discuss “strengthening of relations, expanding Iraq and the Kurdistan Region’s mutual cooperation and partnership with the United Kingdom, the fight against ISIS, developments and stability in Iraq and the wider region,” according to a statement from his office.

The UK has been an important ally of the Kurdistan Region for decades.

Thirty years ago the United Nations Security Council declared a no-fly zone in the north of Iraq, providing a safe haven from the Baath regime that allowed Kurds to gain some autonomy. Sir John Major, then-Prime Minister of Britain, played a key role in securing the no-fly zone. An Erbil street was named after him in April.

The UK is a member of the global coalition against the Islamic State (ISIS) and has trained Peshmerga forces since 2014 and is assisting with major reforms in the Peshmerga ministry.

In January, the UK launched a training program for judges in both Baghdad and Erbil.

Former UK Ambassador to Iraq Stephen Hickey in June said that relations between Erbil and London were "excellent."

“I know that President Nechirvan has had many strong connections with British politicians and British leaders over the last two decades. He is a strong friend of the UK and we really look forward to welcoming him in London very soon,” he said at the time.

Barzani visited London in 2014 when he was prime minister.

The relationship between the Kurdistan Region and the UK is strong in terms of education as well. The UK embassy and consulate general provide Chevening scholarships for students who want to pursue a post-graduate degree in the UK.

The UK is also home for thousands of Kurds who fled Saddam Hussein's regime in the 1980s and 1990s.

This is President Barzani’s second trip to a UN Security Council member state this year. In March, he visited Paris and met with French President Emmanuel Macron.