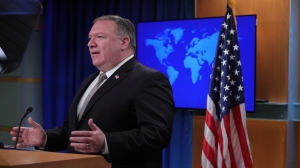 US Secretary of State Mike Pompeo speaks during a news conference at the State Department in Washington, DC on July 8, 2020. (Photo: AFP/Tom Brenner)

WASHINGTON DC (Kurdistan 24) – Addressing journalists on Wednesday, US Secretary of State Mike Pompeo strongly criticized Russia and China for their vetoes at the UN Security Council on Tuesday, which effectively block the delivery of UN humanitarian aid to northern Syria—the northeast, where there was one border crossing, as well as the northwest, which has been supplied by two crossings.

“Just yesterday,” Pompeo said, “Russia and China once again vetoed action at the UN Security Council that would have maintained humanitarian access to desperate Syrian communities.”

“Over the last several months,” he continued, “Russia and the People’s Republic of China have repeatedly abused their veto powers in the council to support the Assad regime strategy of starving its own people.”

A consortium of international NGO’s, including the International Rescue Committee, Norwegian Refugee Council, and CARE International, similarly denounced the Russian and Chinese vetoes.

“There is no justification for Tuesday’s UN Security Council veto on the renewal of cross-border aid into Syria,” they said in a joint statement issued on Wednesday.

The statement noted that the border crossings into northwest Syria were a “vital lifeline” for 2.8 million people, “the majority of whom are women and children,” and called on the Security Council to renew the aid program, before its scheduled expiration on July 10.

In 2014, the Security Council approved a UN program to deliver humanitarian aid to those areas of Syria not under the regime’s control. Four border crossings were authorized: two in the northwest on Syria’s border with Turkey; a third in the northeast, the Al-Yarubiyah border crossing with Iraq; and a fourth in the south, on the Jordanian border.

The program was renewed annually, until last January, when Russia insisted on a more limited, six-month renewal. Additionally, Russia insisted on closing the Jordanian border crossing, as well as the Al-Yarubiyah border crossing which had been used to deliver aid to areas in northeast Syria under the control of the Kurdish-led Autonomous Administration of North and East Syria (AANES.)

“For the past six months, people in northeast Syria have been feeling the effects of what the denial of cross-border aid can do,” the international relief agencies said. “This must not be allowed to continue—or to happen in northwest Syria.”

It was hoped that when the aid program was renewed, the Al-Yarubiyah crossing would be re-opened. Indeed, in June, Belgium and Germany submitted a draft Security Council resolution calling for the continued delivery of aid through the two Turkish crossings for another year and the renewal of aid deliveries through Al-Yarubiyah for another six months.

But on Tuesday, Russia, backed by China, vetoed the proposed draft—which was approved by all 13 of the other members of the Security Council.

On Wednesday, Russia submitted its own draft resolution, authorizing the use of only one Turkish border crossing – Bab al-Hawa, which provides access to the Idlib region – and only for another six months. However, that resolution failed as well, garnering support only from China, Vietnam, and South Africa.

So late on Wednesday, Germany and Belgium submitted another draft resolution, providing for a six-month extension of the aid program, as AFP reported. That draft provides for maintaining the second Turkish border crossing, Bab al-Salam, which leads to the Aleppo region. Al-Yarubiyah was not mentioned in the AFP report.

The Syrian Democratic Council (SDC), the political wing of the Kurdish-led Syrian Democratic Forces (SDF), the partner of the international coalition in the fight against the so-called Islamic State in Syria, had been worried about the prospect of Russia blocking any attempt to re-open the crossing into northeast Syria.

“More than four million people in the northeast of Syria, including IDPs (Internally Displaced Persons) from other cities, refugees, are all under threat of hunger and suffering” if the border crossing remains closed, Sinam Mohamed, the SDC representative in Washington, recently told Kurdistan 24.

The Security Council is expected to vote on the new German-Belgium draft on Friday, when the humanitarian aid program expires.