Kakabaveh on the NATO settlement: A day of sorrow for Sweden 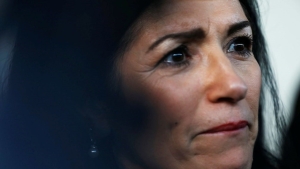 Member of Parliament Amineh Kakabaveh is deeply disappointed with Sweden's NATO settlement with Turkey and calls it a betrayal of the Kurds. At the same time, she threatens to arouse distrust of Foreign Minister Ann Linde (S).

- They sell everything for a membership in NATO. It is a day of sorrow for Sweden, she says.

Since Turkey on Tuesday promised to release its NATO veto after a settlement that includes extradition, counter-terrorism and the abolition of the arms embargo, she says that the Swedish government has deceived the Kurds.

- This is a betrayal of the Swedish government, NATO countries and Stoltenberg who deceive an entire group that liberated themselves and the whole world from daesh. Especially when it comes to the women's struggle, which Sweden claims to support. Thousands of women have sacrificed themselves to liberate the world from daesh, she says, referring to the terrorist group IS.

Kakabaveh already has an agreement with the government that Sweden will continue to support the Kurdish militia YPG, which fights the terrorist group IS in Syria, and deepen cooperation with its political branch, the party PYD. But according to the NATO agreement, Sweden and Finland will not provide support to the YPG or PYD, the latter being, according to Turkey, a cover for the PKK.

- The United States supports these movements and many other countries do the same. If Sweden does not dare to say it directly, they can give the support to the United States, which can send it on, she says.

This spring, the newspaper Turkiye Gazetesi accused five Kurdish Swedish women of collaborating with the PKK, a group that Turkey and the EU have classified as terrorist. The terrorist accusation was repeated by other newspapers in the media sphere controlled by Turkish President Recep Tayyip Erdogan.

At a press conference after Tuesday's NATO settlement, NATO Secretary General Jens Stoltenberg said that Finland and Sweden are ready to work with Turkey on future extraditions of terror suspects.

- Stoltenberg himself feels warm and safe. He does not know how the rest of us escaped from our lives, imprisonment and executions, says Amineh Kakabaveh.

At the same time, she believes that Sweden will legally never be able to extradite people who have fled persecution and risk imprisonment in Turkey.

In summary, Kakabaveh believes that the settlement is morally bad for Sweden.

- People have different expectations of Sweden, which has now bowed to a tyrant. "You leave everything because of a dictator and ally with another dictator," she said, referring to President Erdogan and Russian President Putin.

But do you have no understanding that Sweden must negotiate in order to join NATO?

- Yes, settlements must be negotiated, but why at the expense of the Kurds? Why use Kurds as a badge? Nobody demands Turkey.

At the same time, Amineh Kakabaveh is threatening to arouse distrust in Foreign Minister Ann Linde, from whom she demands an explanation.

- I hope that other political parties call Ann Linde to the Foreign Affairs Committee, otherwise you have to arouse distrust of Ann Linde as Foreign Minister, she says to TV4 Nyheterna.