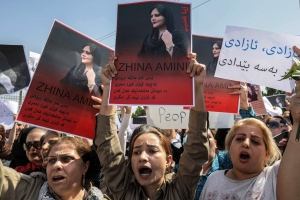 Women protesting the killing of Mahsa Amini in Erbil, the capital of the semiautonomous Kurdistan region in northern Iraq, on Saturday.
Credit...Safin Hamed/Agence France-Presse — Getty Images

The death of a young Iranian Kurdish woman in police custody has set off an intense wave of protests over the past 10 days and ignited a fury in the country’s Kurdish minority community.

Iranian forces on Monday unleashed drone and artillery attacks on the Kurdistan region of northern Iraq, targeting what Tehran says are bases of militant Iranian Kurdish separatist groups there, according to a semiofficial news agency.

The attacks by the country’s powerful Iranian Revolutionary Guards Corps were the second in three days against the militants based in Iraq, according to the Tasnim news agency, which is affiliated with the guards. Tasmin accused the groups of causing chaos in towns along Iran’s northwestern border with Iraq.

The new strikes came as Iran was reeling from 10 days of protests over the killing of a young Iranian Kurdish woman in police custody who was accused of violating the country’s strict codes on modest dress for women.

The protests have thrust Iran into turmoil that has cut across ethnic and social divides. Protests have been especially violent in the northwest, where many Kurds, who make up 10 percent of the population, are living.

The catalyst for the protests was the death of Mahsa Amini, 22, on Sept. 16, three days after she was arrested in the capital, Tehran, after being swept up by Iran’s notorious morality police. She was a member of the Iranian Kurdish minority, which has long suffered discrimination, and the group’s rage in recent days reflects its longstanding grievances.

Her death drew protests from Iranians furious not only over the treatment of women under the country’s conservative clerical rulers, but also a host of other issues, including an economy crippled by years of sanctions and the pandemic.

On Sunday, Iranian security forces appeared to have retaken a small, mostly Kurdish city in the northwest, Oshnavieh, which had been briefly seized by protesters.

Rights group say at least 54 people have died since the protests began. But internet blackouts have made it difficult to determine the exact scope of the government’s crackdown.

Cora Engelbrecht is a reporter and story editor on the International desk, based in London. She joined The Times in 2016.  @CoraEngelbrecht