German court jails IS bride for crimes against humanity 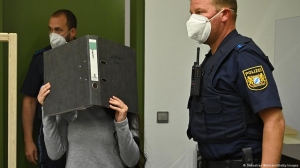 Jennifer W. failed to intervene when her husband chained a 5-year-old girl outside and let her die of thirst

A Bavarian court has handed a 10-year prison sentence to a German woman who allowed a 5-year-old Yazidi "slave" girl to die of thirst.

The Munich Higher Regional Court on Monday jailed a German woman for 10 years after hearing she had stood idly by as a 5-year-old Yazidi "slave" girl was left to die of thirst in the sun.

The conviction of the 30-year-old Jennifer W. is one the first anywhere in the world related to the persecution of the Yazidi community by the "Islamic State" (IS) terrorist group.

What did the court hear?

The court found W. guilty of "two crimes against humanity in the form of enslavement," as well as aiding and abetting the girl's killing by failing to intervene.

The 30-year-old and her "Islamic State" (IS) husband Taha A.-J. "purchased" a Yazidi woman and child.

They were kept as household "slaves" while the couple were living in "Islamic State" (IS) occupied Mosul in 2015.

"After the girl fell ill and wet her mattress, the husband of the accused chained her up outside as punishment and let the child die an agonizing death of thirst in the scorching heat," prosecutors said during the trial.

"The accused allowed her husband to do so and did nothing to save the girl."

W. from Lohne in the state of Lower Saxony grew up as a Protestant but converted to Islam in 2013.

She made her way to Iraq through Turkey and Syria in 2014 to join the IS. As a member of the extremist group's "morality police" in 2015, she patrolled parks in Fallujah and Mosul, armed with an assault rifle and a pistol as well as an explosive vest.

Prosecutors said her task was to look for women who did not conform with the group's strict codes of behavior and dress, prosecutors said.

W. was taken into custody and deported back to Germany while trying to renew her identity papers at the German embassy in Ankara in 2016.

W.'s husband is on trial in separate proceedings in Frankfurt. The verdict there is due in late November.

Identified only by her first name Nora, the girl's mother has testified in both Munich and Frankfurt about the torment allegedly visited on her child. During her testimony, the girl's mother said she was forced to watch her daughter die.

Taha A.-J. was arrested in Greece in May 2019 under a German arrest warrant and was transferred to Germany in October. His ongoing trial — the first against a former IS militant to deal with the IS genocide of the Yazidi — has attracted international attention.

Syria and Iraq's Yazidi minorities were subjected to mass killings, abductions and sexual slavery at the hands of IS. The ethnic group follows a religion that includes elements of Christianity, Judaism and Islam. The ultra-conservative Islamic militants consider them to be subhuman devil worshipers.

In July, a court in Hamburg sentenced the widow of an IS terrorist to extra jail time for using enslaved Yazidi girls to clean her home. She had already been convicted of being a part of the militant organization.