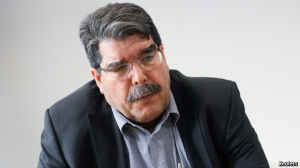 IN A state-run hospital in Turkey’s south-eastern province of Urfa, rows of wounded Syrian opposition fighters gaze listlessly at the ceiling. Many were hurt fighting Syrian regime forces. But some say they were injured in a little-noticed, nasty battle against Syria’s long repressed Kurds.

The Kurds, who landed control of a string of towns and villages in northeast Syria after the men of Bashar Assad, the Syrian president, left voluntarily over a year ago, insist they are the victims of a proxy war that is being orchestrated by Turkey through its Syrian rebel protégés. These allegedly include foreign fighters from Jabhat al-Nusra and the Islamic State in Iraq and Syria (ISIS), the radical Islamist militias that have shot to global notoriety with their brutal ways.

“The Turks have cleared mines, cut barbed wire fencing to let these armed gangs come through the Turkish border,” grumbles Saleh Muslim (pictured), the leader of the Democratic Unity Party (PYD), the Syrian Kurdish group that runs the de-facto autonomous Kurdish enclave. A Syrian rebel fighting the Kurds told our correspondent that “Allah be praised, Turkey is giving us some weapons” though he added that the France and Saudi Arabia were “much more generous”.

Turkish leaders deny they have any hand in the fight and say Mr Muslim’s claims that his group is fighting Islamist extremists are calculated to win western sympathy. What is more Jabhat Al Nusra, is a threat to Turkey’s own security, and Syria’s Arab majority is every bit as worried about the Kurds’ separatist impulses, if not more so.

Yet allegations of Turkish complicity are being aired across the border region.  “Everyone knows what sort of mischief the Turkish authorities are up to,” declared Ismail Arslan, the Kurdish mayor of Ceylanpinar, a hardscrabble border town with a mixed population of Arabs and Kurds. A security guard at a camp for Syrian refugees in Ceylanpinar said he had witnessed rebels cross over from the camp to fight the Kurds in and around the town of Ras el Ain. PYD forces captured the Syrian town in July after heavy fighting that left scores dead on both sides. Western officials say they have voiced their worries to their Turkish allies over foreign jihadists coming in and out of Turkey. “We told them that they were playing with fire,” said a European diplomat.

Turkey, with its own restive Kurdish population, is twitchy about the gains of the Syrian Kurds. The PYD is closely linked to the Kurdistan Workers’ Party (PKK) the rebel group that has been fighting for Kurdish self rule inside Turkey since 1984. About a third of the PKK’s fighting force is Syrian Kurds and many are thought to have returned to help the PYD run their enclave and fight their enemies. Mr Muslim, who speaks fluent Turkish and was trained as a chemical engineer at Istanbul’s Technical University, insists that his people wants “brotherly and peaceful relations with Turkey” and have “absolutely no plans for independence”.

The spectre of a PKK-run statelet is cited among the chief reasons that propelled Turkey’s prime minister, Recep Tayyip Erdogan, to re-open peace talks in January with the imprisoned PKK leader Abdullah Ocalan. The aim was to get Mr Ocalan to use his influence (undiminished by 14 years in jail) to persuade the PYD to join forces with the Syrian opposition and to help topple Mr Assad. Mr Muslim was twice invited to Istanbul, most recently in August, to the same end. But the PYD says it intends to remain “neutral”. To Turkish ears this means that the group will continue to side with Mr Assad.

Turkey has also appealed to Massoud Barzani, the leader of the Kurdish regional government in northern Iraq, to help rein in the PYD.  Mr Barzani, who makes no secret of his distaste for the group saying they are hogging power, has obliged by keeping his side of the border with Syria partially sealed. This has helped to prevent the flow of arms and PKK fighters from their mountain bases in northern Iraq to the Syrian Kurdish areas. But this also means that sorely needed humanitarian supplies are not reaching the Syrian Kurds because Turkey’s borders with the PYD controlled areas are shut as well.

This week Turkey scored a modest victory after the PYD’s puny and fractious Syrian Kurdish rivals, who are notionally united under the Kurdish National Council, signed a deal with the Istanbul-based Syrian National Coalition. The Syrian opposition has pledged to grant the country’s two million or so Kurds cultural and political rights in exchange for their support. Mr Muslim scoffs that the PYD “is not bound by the agreement”.  This, in turn, means that the agreement will have little effect on the ground. Syria’s “war within a war” is set to grind on.