Turkish occupation of Afrin four years on | Nearly 7,500 kidnappings and arrests and 2,300 other violations by Turkish forces and their proxy factions • The Syrian Observatory For Human Rights 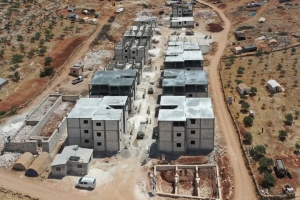 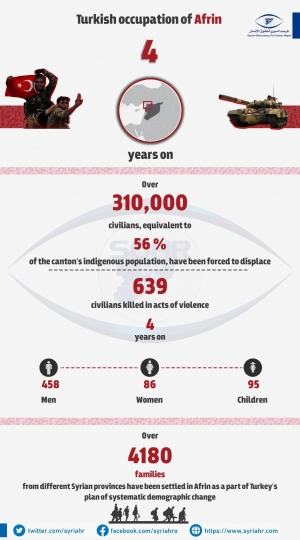 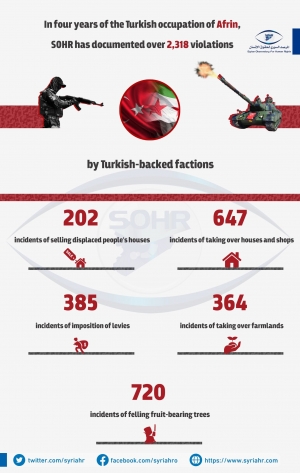 Today, March 18, Syrians mark the fourth anniversary of the occupation of Afrin city and affiliated districts, (aka “Afrin canton”) in the north-western countryside of Aleppo by Turkish forces and their proxy factions and mercenaries. These forces launched a large-scale military operation they called “Olive Branch” on January 2018 and imposed full control of the canton on March 18, 2018.

For four years, the canton has experienced scores of humanitarian crises and security chaos which is deteriorating daily, where violations and explosions are documented regularly. Since the first day of the Turkish invasion, with the participation of factions of “Olive Branch” operations room, the Syrian Observatory for Human Rights (SOHR) has monitored and tracked all developments and documented all violations against the people of Afrin, including incidents of looting and sabotage of private and public properties, all of which have been covered by SOHR through daily news articles and reports.

The Turkish invasion, fierce military operations and heinous crimes by the factions have forced over 310,000 civilians, equivalent to 56% of the indigenous residents, to flee from their land and homes. Accordingly, residents lost their properties which have been taken over by Turkish-backed factions. While the situation of those residents who have chosen to stay in their areas over displacement has not been better, as they have endured absolute repression and blatant human rights violations, including kidnappings and arbitrary arrests with the aim of collecting ransoms, along with ongoing and daily incidents of seizure of harvest, houses, shops and cars. Through all of these violations, Turkish-backed factions are attempting to force the remaining residents out from Afrin as a part of Turkey’s plan of systematic demographic change.

Since January 20, 2018, the Syrian Observatory for Human Rights (SOHR) has documented the death of 639 Kurdish civilians in Afrin, including 95 children and 86 women in explosions of IEDs and car bombs, airstrikes and ground bombardment by Turkish forces and executions, while some died under torture in prisons run by Turkish-backed factions.

Also, SOHR has documented, since the beginning of Turkish occupation of Afrin until the evening of March 17, 2022, the kidnapping and arrest of over 7,497 Kurdish civilians from Afrin, 1,300 of whom remained imprisoned, while the rest have been released, after most of them paid large ransoms which factions of the Turkish-backed “National Army” required.

According to SOHR statistics, over 4,180 families from different Syrian provinces were settled in Afrin, after having been forced to displace from their land, as a part of Turkey’s plan to change the demography of Afrin. Under Russian-Turkish agreements, Afrin was handed over to the Turks in return for allowing the Syrian regime to capture eastern Ghouta. The Syrian Observatory has been all along warning against the Turkish plan of systematic demographic change in Afrin since the first day of the Turkish occupation, where over half of the population of Afrin canton has been forced to displace from their homes, while thousands of families from other provinces have been settled in the canton instead; all of this has taken place in full view of the international community which seemed to be indifferent and kept silent.

In four years of the Turkish occupation of Afrin, SOHR has documented over 2,318 different violations added to those kidnappings and arbitrary arrests. Here are further details of these violations:

Afrin is well-known for its archaeological sites which date back to different eras; the most prominent sites are:

These sites as well as many other archaeological sites around Afrin have been subject to excavation and digging work by Turkish-backed factions in the past for years, where too many relics, antiques and artefacts have been stolen from the archaeological site of Nebi Huri known as “Hagioupolis” or “Khoros” which date back to 280 B.C. (Hellenistic era).

Moreover, the excavators used heavy diggers and earth-moving machineries during excavation and digging work, searching for buried treasures to sell them abroad. Many sites have been destroyed, including the following:

For four years of the occupation of Afrin city and surrounding districts, Turkish forces and their proxy Syrian factions have wreaked havoc and committed plethora of heinous crimes breaching all international conventions and charters and human rights laws, amid “shameful” and “suspicious” inaction by the international community which exhibits no willingness to put an end to these “grave” violations, despite SOHR’s repeated warnings about the dreadful humanitarian situation in the region.

We, at the Syrian Observatory for Human Rights (SOHR), renew our appeal to the international community to interfere immediately and exert pressure on the Turkish government and its proxy factions to stop their violations in Afrin, bring the Turkish occupation to an end and secure safe return of indigenous residents who have been forced to displace during the recent military operation.