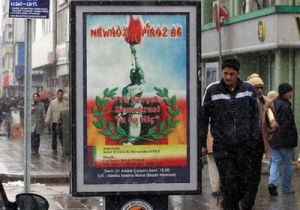 FILE - In this March 17, 2007 file photo, pedestrians in the eastern Turkish city of Van walk past a billboard celebrating the spring festival of Nowruz, with writing in Turkish and Kurdish reading 'Real democracy or nothing!' Since the latter part of 2010, Kurdish politicians and activists have aggressively promoted Kurdish in public settings, challenging its status as a restricted, once shunned language, and alarming Turks who view the campaign as a threat to national unity and a harbinger of bolder demands for regional autonomy.

ANKARA, Turkey — As a child, Emrah Kilic couldn't understand a word his grandmother was saying. That's because she was speaking Kurdish, the family's ancestral language, whose public use was harshly suppressed in the name of forging a unified Turkish nation.

Raised by parents who shed their ethnic roots to blend in with the Turkish mainstream, he now finds himself in a quandary. "I am confused about whether I should pursue the roots," he says. "But I am scared that it will change things, open a Pandora's box."

The 28-year-old's dilemma is understandable. As Turkey's Kurds struggle for recognition of their ethnicity, their embattled Kurdish language is making a comeback that is testing Turkish society's tolerance of diversity. The current government, more accepting of minority aspirations, has loosened the language curbs, but this is provoking a backlash from nationalists who fear the country's identity is under threat.

Turkey's 20 percent Kurdish minority has been a traditional target of state discrimination and the more militant among them have waged a 26-year insurgency that killed tens of thousands. The violence has ebbed for now, but ahead of parliamentary elections in June, the nationalists worry that the escalating push for language rights masks a more ambitious goal -- autonomy.

"When you go to the weekly bazaar, you hear nothing but Kurdish," grumbles Ikbal Erdogan, 36, a dentist in Adana, a city with a large Kurdish population. "I do not shop from those who try to make it clear that they are Kurdish. I think we should protest those who try to break our unity under our noses."

For Turkey, a NATO partner and growing economic and diplomatic power, the Kurdish issue is a drag on its aspirations to be recognized as a model for democracy in an overwhelmingly Muslim country. It wants to join the European Union, but that quest is hindered by accusations of neglecting the rights of Kurds.

Most of Turkey's Kurds live in the southeast, though in past decades large numbers headed to Istanbul and other western cities to escape war and poverty. Many blended successfully into mainstream society. The worst era of discrimination has ended, and the Islamic-leaning government that took office after decades of doctrinaire secularism has sought to turn a page with its restive minority.

But the pro-Kurdish Peace and Democracy Party is leading a charge for more rights that government officials fear will undo the good will. "At a time when we started to see our differences as richness rather than something to be feared, as in the past, a more responsible and careful conduct on everyone's part would further open our way," warns President Abdullah Gul.

The language demands may seem harmless to outsiders -- dual-language welcome signs when Gul recently visited the southeast last month, or a campaign for bilingual shop signs. The bilingual sign on the municipal office in the eastern town of Erentepe that reads "Belediye Baskani" in Turkish and "Seroke Saredariye" in Kurdish. Both mean "mayor."

Nonetheless, the military, which considers itself the guardian of the constitution, last month expressed "grave concern" about the spread of Kurdish.

"There are intense efforts to take recent public debates over 'our language' to a point that could radically change the foundation philosophy of our republic," it said in a statement. "History is full of bitter examples of the consequences of a nation without a unified language."

Particularly provocative to mainstream Turks is the use of Kurdish in official settings.

In 1991, Kurdish lawmaker Leyla Zana was vilified for adding a few words in Kurdish to her oath of office. She later served 10 years in prison, convicted of belonging to a Kurdish armed group, a charge she strongly denied.

The unyielding stance on language was evident again just last November, when dozens of Kurds, including elected mayors, went on trial on charges of having links to a rebel group. When one started to read a statement in Kurdish, his microphone was turned off and Turkish media quoted the chief judge as saying the defendant was speaking in an "unknown language."

The government points to steps it has taken to expand the use of Kurdish, including radio and television broadcasts, letting politicians campaign in the language and allowing prison inmates and visiting relatives to speak it. Kurdish is not taught in schools but private instruction is no longer illegal. Last year, a university in Mardin city offered the first graduate studies program on the Kurdish language.

But Selahattin Demirtas, chairman of the Peace and Democracy Party, is impatient.

Perihan Yilmaz is a 27-year-old minority rights activist in Ankara, the Turkish capital. Though not Kurdish, she's interested in the subject but had a hard time finding texts and grammar books. Fellow students were so taken aback that she pretended she was studying Greek. "Kurdish language is perceived as a challenge in this society, even today," she says.

Most Kurds are scattered over four countries and enjoy varying levels of freedom. Kurdish and Arabic are official languages in Iraq. Iran recognizes Kurdish as a regional language but keeps a tight lid on Kurdish political activism. Syria imposes harsh restrictions on the language.

Emrah Kilic's parents spoke only Turkish to their children and moved west, away from the Kurdish heartland, to the Mediterranean city of Antalya, where Kilic runs a hotel and is married to an ethnic Turk. "People get surprised when I tell them I am Kurdish," he said.

"The least of my parents' concerns was identity, or language," he said. "We never talked politics in the house, and still we never do. They chose to merge with the rest and I respect the decision."