Syria: The Citadel & the War 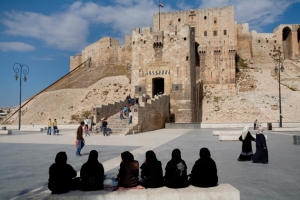 The Citadel, the medieval fortress at the center of Aleppo, Syria. The city has recently been the scene of clashes between government forces and opposition groups.

Archaeologists believe that human beings settled on the hilltop that became Aleppo—some 225 miles north of Damascus—around eight thousand years ago. Cuneiform tablets from the third millennium BC record the construction of a temple to a chariot-riding storm god, usually called Hadad; while mid-second-millennium Hittite archives point to the settlement’s growing political and economic power. Its Arabic name, Haleb, is said to derive from Haleb Ibrahim, Milk of Abraham, for the sheep’s milk the biblical patriarch offered to travelers in Aleppo’s environs.

Successive conquerors planted their standards on the ramparts of a fortress that they enlarged and reinforced over centuries to complete the impressive stone Citadel that dominates the city today.

“It is an excellent city without equal for the beauty of its location, the grace of its construction and the size and symmetry of its marketplaces,” wrote the great Arab voyager Ibn Batuta when he visited in 1348. During the Renaissance, Aleppo was Islam’s third most important city after Constantinople and Cairo. The modern Lebanese historian Antoine Abdel Nour praised it in his Introduction à l’histoire urbaine de la Syrie ottomane:

Metropolis of a vast region, situated at the crossroads of the Arab, Turkish, and Iranian worlds, it represents without doubt the most beautiful example of the Arab city.

Its beauty reveals itself in the elegance of its stone architecture, redolent of historic links to Byzantium and Venice; and in the diversity of its peoples—Arabs, Armenians, Kurds, eleven Christian denominations, Sunni Muslims, a smattering of dissident Shiite sects from Druze to Ismailis, ancient families of urban patricians as well as peasant and Bedouin immigrants from the plains—that makes it a microcosm of all Syria.

Documentary records of Ottoman Turkey’s dominion over Aleppo from 1516 to 1918 portray communities of Muslims, Christians, and Jews living in the same neighborhoods. Unlike Tunis, where Jews were obliged to rent living space, Aleppo’s governors imposed no restrictions on house ownership by members of any religious group or by women. It was not unusual for large mansions to be divided into apartments in which Muslim, Jewish, and Christian families dwelled with little more than the usual rancor that afflicts neighbors everywhere. Unlike more xenophobic Damascus, Aleppo encouraged European traders to trade and live within the city walls. The European powers, beginning with Venice in the sixteenth century, established in Aleppo the first consulates in the Ottoman Empire to guard the interests of their expatriate subjects. Reputed descendants of Marco Polo, the Marcopoli family, retained the office of Italian honorary consul well into the twentieth century.

In a neglected corner of the old Bahsita Quarter, behind several old office buildings, stands a monument to Aleppo’s historic mélange. The Bandara Synagogue was built on a site of Jewish worship that predates by two centuries the …