‘Tell those stories’: Kurds call for torture prison to be turned into place of healing 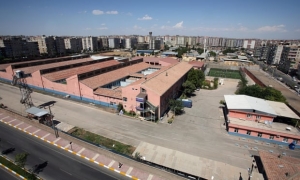 Military Prison No 5 in Diyarbakır, Turkey, has become a symbol of Kurdish resistance against the state. Photograph: Cenk Ertekin / Alamy

Altan Tan was 24 when Diyarbakır’s notorious Military Prison No 5 was built, just before Turkey’s 1980 military coup. Not long after that, his father was thrown inside, never to emerge.

“He was only there for a few weeks before he was tortured to death. I never had the chance to go inside and visit him,” the Kurdish politician and writer said. “There are no Kurds, no families who don’t have memories associated with this building.”

Diyarbakır, a city of 1.8 million in Turkey’s south-east, is the country’s unofficial Kurdish capital, with a complex, proud and bloody history of resistance against the state.

For many, the prison is the ultimate manifestation of the pain of the Kurdish struggle: in the 1980s and 90s, thousands of Kurdish men and women were imprisoned there and subjected to horrific forms of torture, earning it the reputation of being one of the worst prisons in the world.

The abuses committed inside its walls fuelled the rise of the Kurdistan Workers’ party, or PKK, which has fought against the Turkish state ever since.

Diyarbakır prison is still a functioning jail today. But on a rare visit to the city last week, his first in two and a half years, President Recep Tayyip Erdoğan announced that the site would be turned into a cultural centre.

The decision has been met with a mixed reaction, in large part because no one knows exactly what the president means by “cultural centre”. Almost everyone agrees the prison should be closed down, but some worry that if the project is not sensitively managed an important piece of Kurdish history will be lost – or even whitewashed.

Other restoration and regeneration projects undertaken during Erdoğan’s time in office have been fiercely criticised for damaging important historical sites.

“When the peace process [between the Turkish government and the PKK] was at its peak 10 years ago, we had a similar discussion,” said Dilan Kaya Taşdelen, a Diyarbakır-based urban planner. “The president said then we should just demolish the prison, but in my opinion we have to keep it in order to both confront the past and heal as a community. At the time there was a big push from civil society to turn it into a museum to tell those important stories.

“There’s a big difference between a cultural centre and a museum … I don’t know if the new idea really suggests that we are going to create something which shows what we have learned from history. Erasing those memories would be wrong.”

A spokesperson for Turkey’s ministry of culture did not respond to requests for further information about plans for the prison.

Erdoğan’s visit to Diyarbakır comes at a sensitive time: his ruling Justice and Development party (AKP), which has long enjoyed the support of working-class and conservative voters, including Kurds, has hit an all-time low owing to the government’s mishandling of Turkey’s economic woes.

Since 2015, when a ceasefire between the PKK leadership and the Turkish government collapsed, Ankara has pursued the PKK with fury across south-east Turkey, northern Iraq and north-east Syria, inflicting heavy losses and curtailing the militants’ movements.

At the same time, thousands of Kurdish activists and politicians inside Turkey have been removed from office or jailed, and the Peoples’ Democratic party (HDP), the main pro-Kurdish political party, which Erdoğan alleges is the same as the PKK, is facing the prospect of being outlawed altogether.

“Like a lot of Erdoğan’s political gestures, the idea of a cultural centre or a museum at the site of Diyarbakır prison is highly symbolic,” said Abdulla Hawez, a Kurdish affairs researcher.

“What he was communicating is, ‘We have turned a page on the Kurdish issue, it’s time to move on.’ Of course the truth is the total opposite: in the same speech he also doubled down on the government’s position on the PKK and HDP. That’s what makes this idea problematic … Turning the prison into something else is about narrative control.”

After six years of crackdown, Turkey’s Kurdish opposition is tired. A 2020 study by Rawest, an independent research centre based in Diyarbakır, also found that young Kurds in Turkey differ from previous generations with a marked “disinterestedness” in politics compared with older people when they were the same age: only 28.5% of those interviewed believed that Kurds’ position in society would improve in the next five years, no matter who was in charge.

For Taşdelen, the urban planner, it is important that future generations are able to connect with and understand the past. She sees Johannesburg’s Constitution Hill, a former jail that is now the site of South Africa’s constitutional court, as a good potential model for Diyarbakır prison.

“When you visit that museum, the door opens at the end to the court, where human rights are respected,” she said. “It creates a sense of hope. There’s no reason we can’t do that here too, but it needs to be a collaborative process, and Kurdish society needs to be involved.”