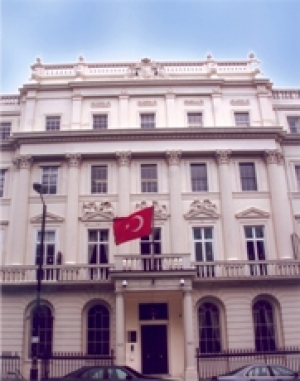 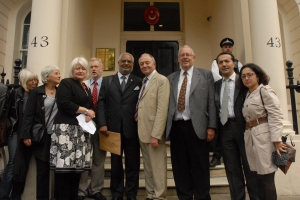 A letter from Archbishop Desmond Tutu was to be personally delivered by Rev Matthew Esau, Vice-Chair of KHRAG and a delegation of UK supporters to the Turkish Embassy in London, today, Tuesday 10 August 2010 at 11.00 am. However despite prior arrangement the delegation were met on the doorstep by a police officer who not only refused entry to the Embassy but informed them he was under strict instructions not to allow the delivery of any letters.

In a letter dated July 2010, Archbishop Desmond Tutu, Anglican Archbishop Emeritus of Cape Town and the Chair of ‘The Elders’ called on the Prime Minister of Turkey, Mr Recep Tayyip Erdogan, as the political head of Turkey, to use his office and his influence to bring a lasting end to the conflict in Turkey with regards to the Kurdish question.

The Archbishop complimented Mr. Erdogan and his government for the support given to the people of Palestine, saying “We regard your pronouncements as the right ones and a declaration that matters of conflicts between nations can be settled only through peaceful negotiated talks amongst apposing groups.”

The Chair of ‘The Elders’ pointed out however that he was “concerned at the escalation of the conflict between the Turkish and the Kurdish peoples in which innocent young people, from both sides, are losing their lives.” Tutu continued, “We know from experience that no-one can emerge as the victor in such a conflict.” Like the situation in the Middle East, where “Peaceful negotiations are the only lasting solution to their problems, we are firmly of the view that the Kurdish question can likewise be resolved through peaceful negotiations with the genuine leadership of the Kurdish people.”

Archbishop Emeritus Tutu offered the help of the Kurdish Human Rights Action Group (KHRAG) “a human rights organisation in South Africa (who are) prepared to help in the initiative and (who will) assist in mobilising international support for the peaceful resolution of the Kurdish question in your country.”

«I am deeply disappointed in the behaviour of the Turkish Embassy here in London. We informed them over a week ago that we wished to deliver a letter from Archbishop Tutu. We spoke to the Personal Assistant of the Ambassador and she assured us that even if the Ambassador could not meet with me she would be able to take the letter from me. On arriving at the Embassy this morning I spoke to the policeman who was standing in front of the door, he said he was under strict instructions not to let anybody come in or to accept any letters. This behaviour is unbecoming towards representatives of Archbishop Tutu and we take it as a slap in the face to the Chair of the Elders, Archbishop Tutu. We will protest this behaviour to the highest level in the Turkish government. Not even during apartheid when we were fighting the racists and those who were oppressing black people in South Africa did our Embassy here in London or anywhere else in the world refuse to receive letters. The letter from Archbishop Tutu is a magnanimous request to Prime Minister Erdogan to find a way of settling the Kurdish Question and if this is the way in which the Turkish government approaches the offer of help from Archbishop Tutu then we are very saddened but we will not stop our efforts to try and engage the Turkish government.»

Jeremy Corbyn MP who was part of the delegation echoed Rev Esau’s concerns saying: “It is high time that there were proper talks between the Turkish government and the political representatives of the Kurdish people. It is extraordinary that the Turkish Ambassador refused to even open the door to the personal representative of Archbishop Tutu. So we will send the letter and continue the campaign for justice.”

Peace in Kurdistan Campaign: Campaign for a political solution of the Kurdish question
44 Ainger Road, London, NW3 3AT