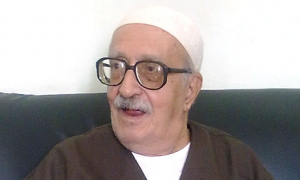 Tariq Aziz, Saddam's Hussein's deputy: 'We are all victims of America and Britain. They killed our country in many ways.' Photograph: Martin Chulov for the Guardian

Saddam Hussein's most loyal deputy, Tariq Aziz, has accused Barack Obama of 'leaving Iraq to the wolves' by pressing ahead with a withdrawal of combat troops in the face of festering instability and a surge in violence.

In his first interview since he was captured shortly after the fall of Baghdad more than seven years ago, Iraq's former deputy prime minister and long-time face to the world said the United States would cause the death of Iraq if it continued to withdraw its combat forces.

"We are all victims of America and Britain," he told the Guardian from his prison cell in Baghdad. "They killed our country in many ways. When you make a mistake you need to correct a mistake, not leave Iraq to its death."

Speaking only days after Obama confirmed that the US would be ending its combat mission in Iraq this month with the withdrawal of thousands of troops, Aziz said the country was in a worse state than before the war.

"For 30 years Saddam built Iraq and now it is destroyed. There are more sick than before, more hungry. The people don't have services. People are being killed every day in the tens, if not hundreds. "I was encouraged when [Obama] was elected president, because I thought he was going to correct some of the mistakes of Bush. But Obama is a hypocrite. He is leaving Iraq to the wolves."

Aziz is currently incarcerated in a clean and well-managed small prison in Qadhimiyah in Baghdad's north, after being handed over to Iraqi authorities by US forces several months ago. He said he refuses to criticise Saddam and his regime.

"If I speak now about regrets, people will view me as an opportunist. I will not speak against Saddam until I am a free man. Wisdom is part of freedom. When I am free and can write the truth I can even speak against my best friend," he said.

But he went on to mount a strong defence of the former Iraqi dictator.

Saddam, who was executed in 2006 after being captured by US forces, was at the centre of three wars, 12 years of sanctions and the brutal suppression of two uprisings, all of which Aziz had to sell to the world as Iraq's long-term deputy prime minister and foreign minister.

"Wars are wars, and there are reasons for them," he said of Saddam's belligerence.

"Saddam did not lie," he claimed. "He did not change the facts. He is someone for whom I have a great respect and love. He is a man who history will show served his country.

"Saddam built the country and served the people. I can not accept your [the west's] judgment that he was wrong.

Aziz claimed he tried to persuade Saddam not to invade Kuwait in 1990, because it would lead Iraq into a war with the US within a few years of the debilitating decade-long conflict with neighbouring Iran.

"I asked Saddam Hussein not to invade Kuwait," he said. "But I had to support the decision of the majority. When the decision was taken, I said to him this is going to lead to war with the US, and it is not in our interests to wage war against the US."

Casting himself as an unquestioning patriot, Aziz continued: "But the decision was taken. I was the foreign minister of the country and I had to defend the country and do everything possible to explain our position. I stayed on the side of right."

Throughout the next decade of UN-enforced sanctions and the oil for food programme, Aziz claimed he and Saddam managed to nourish all Iraqis and maintain stability throughout the country.

"Even during the time of sanctions, which is a difficult time in the life of any country, every day, every man, woman and child was taking 2,000 calories per day."

As another conflict with the United Nations and US loomed in the lead-up to the 2003 invasion, Aziz said he tried to convince the world that its fears that Iraq was concealing a secret weapons programme were unfounded.

"I was in charge of supervising the work of Unscom. I attended hundreds of meetings with them at hundreds of sites, but they were committed to proving the untrue. Bush was going to war regardless."

Saddam, however, preferred a policy of ambiguity, a stance that heightened US and British suspicions. After his capture, Saddam told the FBI that his main intent had been to keep Iran guessing, not to beat the drums of war.

"Partially it was about Iran," Aziz confirmed. "They had waged war on us for eight years, so we Iraqis had a right to deter them. Saddam was a proud man. He had to defend the dignity of Iraq. He had to show that he was neither wrong nor weak.

"Now Iran is building a weapons programme. Everybody knows it and nobody is doing anything. Why?"

• This article was amended on 6 August 2010. The original said: Aziz claimed he tried to persuade Saddam not to invade Kuwait in 1991. This has been corrected.