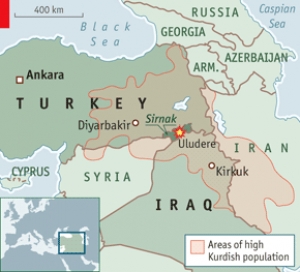 The political aftershocks of a killing of Kurds still reverberate

TURKEY’S treatment of the Kurds has a grim new symbol. On December 28th Turkish warplanes bombed Kurdish smugglers crossing into Turkey from Iraq, killing 34. Most were teenagers; the youngest was 12. All came from a pair of villages in the mainly Kurdish township of Uludere. Their families had trouble separating the remains from mules who died. “We pieced them together the best we could and buried them,” says Abdurrahman Yurek, who lost his 16-year-old son.

The victims were apparently mistaken for militants of the separatist Kurdistan Workers’ Party (PKK). In fact, the village men are members of a state-paid Kurdish militia fighting the PKK. Members of a parliamentary inquiry who saw footage from Turkish drones say it shows that none of the villagers were armed and their mules were laden with diesel fuel. People were outraged. “This wasn’t a mistake, it was a planned massacre,” fumed Ertugrul Kurkcu, an MP from the pro-Kurdish Peace and Democracy Party (BDP).

More likely, it was a horrible blunder. Turkey’s prime minister, Recep Tayyip Erdogan, admitted as much when he suggested the army may have suspected there were PKK fighters in the villagers’ midst. Yet many questions remain. Why were civilians targeted, who provided the intelligence and who gave the orders? “Above all, why hasn’t the government apologised?” asks Hasim Encu, headman of a village where victims were buried.

Turkey’s Kurds feel ever more alienated, and sympathy for both the BDP and the PKK is rising. In a show of defiance, the victims’ headstones are draped with Kurdish banners. The villagers refuse to accept compensation until they get justice. Vahdettin Ozkan, the governor of Sirnak province, says the image of Mr Erdogan’s mildly Islamist AK party has suffered a “terrible blow”. An article in the Wall Street Journal quoted Pentagon officials saying that American drones spotted the caravan and alerted the Turks. American officials offered more surveillance to identify the convoy but “Turkish officers instead directed the Americans who were remotely piloting the drone to fly it somewhere else.”

Mr Erdogan accused “foreign provocateurs” of exploiting the affair. He said that the BDP and the PKK were “necrophiles” seeking political gain and that journalists were servants of their cause. His message, as Sabah, a pro-government newspaper, put it, was “Shut up.” He has already claimed a victim: Ali Akel, a critic and veteran columnist for another pro-government paper, Yeni Safak, has been fired.

Mr Erdogan has now announced plans to ban abortion, saying that “every abortion is an Uludere”. Outraged feminists have taken to the streets. “The prime minister should stop being the custodian of vaginas,” said Aylin Nazliaka, a female MP from the opposition CHP party. “We used to have faith in the prime minister; now it’s all but dead,” says Mr Encu.

In truth, Mr Erdogan did more than any predecessor to tackle the Kurdish issue, becoming the first Turkish leader publicly to admit that the state made mistakes, and talking to the PKK. But the talks were scrapped last year. Mr Erdogan blames PKK attacks. The Kurds say he was not sincere, pointing to the arrests of thousands, including 38 BDP mayors. Leyla Zana, a BDP MP who spent ten years in jail, has just been sentenced to ten more years. Even Islamists are losing faith in Mr Erdogan. “The women of Uludere did not have abortions, they bore their children,” said Hidayet Sevkatli Tuksal, a female theologian. “They ended up gathering their corpses.”