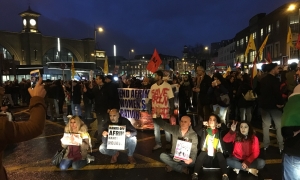 Protests thought to be part of action to raise awareness of Turkish attacks on Kurdish-held Afrin in Syria.

Piccadilly station in Manchester and King’s Cross in London have reopened after being closed by demonstrations involving protesters.

In Manchester, about 100 protesters demonstrated on the railway tracks, and the station was closed for three hours.

The group, who carried signs reading “stop Turkey from helping Isis terrorists”, walked on to rail lines at about 1pm on Sunday, preventing trains from entering and leaving the station. It was reopened at about 4pm, with services remaining disrupted.

A similar protest was staged on Sunday evening at King’s Cross station, which was closed temporarily with services diverted to other stations.

The protests are thought to have been part of a national day of action to raise awareness of Turkish attacks on the Kurdish-held district of Afrin in northern Syria.

In a statement about the incident in London, National Rail said: “Police have successfully dealt with the incident outside the station at London King’s Cross and the station has now been reopened.

“Trains continue to be able to arrive and depart from this station as normal and customers are now able to access the platforms. However, as some train services have been revised and diverted, trains to and from King’s Cross may still be delayed or revised as the service recovers.”

While the Kurdish People’s Protection Units (YPG) is seen by US-backed forces as key in the fight against Isis in the country, the Turkish government considers it a terrorist group.

Turkey launched a military offensive against the YPG two months ago to clear the group from Afrin, a move that has been described as ethnic cleansing. The Turkish president, Recep Tayyip Erdoğan, has urged Nato to come to Turkey’s aid, saying its borders are “under threat right now”.

In a statement on Facebook, the group Friends of Kurdistan Manchester said the protest there was part of an international day of action to highlight events in Afrin, with a similar protest held at Düsseldorf airport on Sunday.

“The Kurdish community and its allies are marching in Manchester, and across the world, in solidarity with the defenders of Afrin and demanding international intervention,” they said. “Turkey is the second-largest army in Nato and his forces have committed numerous war crimes since crossing the border into Afrin.”