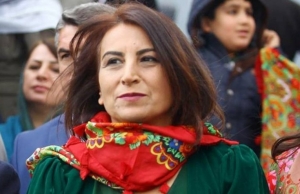 Raising concerns that she is not treated in healthy conditions, the lawyers of imprisoned Kurdish politician Aysel Tuğluk have called on the authorities to issue the forensic medical report as soon as possible.

"One of the Kurdish politicians and laborers of democratic politics who have been held in prison with political motives for nearly five years is Ms. Aysel Tuğluk, who served as the DTP Co-Chair, the HDP Vice Co-Chair and a Member of the Parliament in the past.

"We would like to indicate that since Ms. Aysel Tuğluk fell ill in prison, her lawyers, the HDP Legal Commission and the Human Rights Association (İHD) Central Office have been meticulously following up the process almost on a daily basis so that she will be provided with the necessary treatment and that she will be simultaneously released from prison.

"Our numerous written applications have been submitted to the relevant authorities and the last stage has been reached. As the local medical institution reports on Aysel Tuğluk have been finalized and considering that she was also examined by the Forensic Medicine Institution last week, we are waiting for the forensic medical report to be issued without any delay.

'Public will be informed'

"As Ms. Aysel Tuğluk and her family, since the beginning, do not want her disorder to be shared with the public before the process is completed, we, by complying with their will, will inform the public again in the event that the legal proceedings we are undertaking are completed."

Extending their thanks to all segments of the society expressing sensitivity to the health condition of Aysel Tuğluk, the lawyers have reiterated that the Forensic Medicine Institution should issue the report without delay.

On December 29, 2016, when she was the Vice Co-Chair of the Peoples' Democratic Party (HDP), Kurdish politician Aysel Tuğluk was arrested along with seven other politicians from the Democratic Regions Party (DBP) and the Democratic Society Congress (DTK).

The indictment filed against Tuğluk, who was the DTK Co-Chair till September 2014, brought her statements to the press as well as the funerals that she attended as criminal evidence against the politician.

As Aysel Tuğluk's appeal to the Ankara Regional Court of Justice was rejected, her file was sent to the Court of Cassation.

She was the founding member and Co-Chair of the Democratic Society Party (DTP) and elected Diyarbakır MP in 2007-2009. She became the Van MP of the Peoples' Democratic Party (HDP) in 2011-2015. She served as the Vice Co-Chair of the HDP responsible for Law and Human Rights.

Born in Elazığ in 1965, she graduated from the Faculty of Law of İstanbul University and worked as a self-employed lawyer. (EMK/SD)