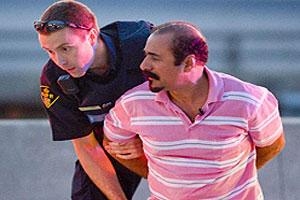 WASHINGTON, On Friday, September 4, 2009, Kurds and their supporters will be gathering at the Canadian Embassy in Washington, D.C. (from 12:00pm-2:00pm) to protest the arrest of Kurdish folk singer, poet and activist Sivan Perwer and demand a formal apology from Canadian PM Stephen Harper to Sivan Perwer and to the Kurdish people. A similar demonstration, sponsored by Toronto Kurdish House, is being held on Saturday, September 5, 2009 at the Legislative Assembly of Ontario Street (Queens Park) in Toronto from 5:30pm until 8:00pm.

On Sunday, August 16, 2009, Sivan Perwer and three members of his film crew were arrested en route to a performance at the Toronto Kurdish Community Center by Canadian police (OPP) near Niagara Falls. The OPP were operating on an anonymous tip that a weapon had been spotted in the black Hummer the men were traveling in. Once OPP established that the weapon in question was actually camera equipment being used to film footage for an upcoming Kurdish television program, the men were released from custody.

"We were just filming Canada's countryside, and then there were guns everywhere! One policeman said, 'I will shoot . . . I will kill you now!' It hurt our honor. It hurt a lot," said a visibly shaken Sivan Perwer in an interview shortly after the incident.

By the request of Massoud Barzani, president of the Kurdistan Regional Government (Iraq), KRG Foreign Minister Falah Mohammad Bakir has written an official letter to PM Harper demanding a formal apology to both Sivan Perwer and also the Kurdish people. This demand is increasingly being echoed by Kurdish leaders and organizations worldwide.

The organizer of this event, Amy Kurmanj, is an advocate of Kurdish self-determination and has been a volunteer for various Kurdish groups and organizations for twelve years. In her activities as a volunteer, she has assisted with the settlement of Kurdish refugees, the organization of social and political events and served as a media contact and liaison. She is currently a volunteer for Kurdish speaker and activist, Kani Xulam, founder and director of American Kurdish Information Network (AKIN) in Washington, D.C.