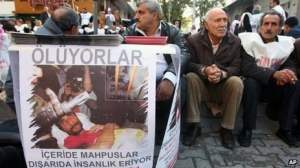 Doctors had warned that some of the strikers were close to death.

Hundreds of Kurdish prisoners in Turkey have ended a 68-day hunger strike after jailed ex-rebel leader Abdullah Ocalan urged them to do so.

The prisoners had been demanding better conditions for Mr Ocalan and more use of the Kurdish language in public life.

On Saturday, Mr Ocalan called on the hunger strikers to stop, in a statement issued by his brother.

Some 40,000 people have died in the 25-year conflict between the Turkish state and the PKK militant group.

The PKK (Kurdistan Workers' Party) has waged a guerrilla campaign in south-east Turkey for the establishment of an ethnic homeland for the Kurdish people.

Five Turkish soldiers were killed on Sunday in clashes with rebels near the Iraqi border, according to Turkish media reports.

Mr Ocalan is serving a life sentence in a prison on an island near Istanbul.

On Saturday his brother Mehmet said Mr Ocalan had told him that the hunger strike had "achieved its goal".

"Without any hesitation, they should end the hunger strike," he said.

Doctors had recently warned that many of the strikers were close to death.

There has been no indication from authorities that the conditions of Mr Ocalan's detention will be changed.

The government is due to present a bill to parliament next week allowing Kurds to use their own language in court, but the strikers had branded this insufficient.

Several prominent members of the pro-Kurdish BDP (Peace and Democracy Party) had joined the strike, but party figures said they would heed Mr Ocalan's call.

Tensions between the Kurds and the Turkish majority have been running high in recent months, analysts say.