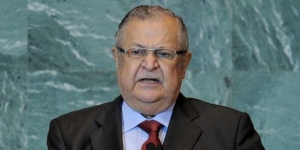 Iraqi President Jalal Talabani has suffered a stroke and is being treated in hospital, media and officials say.

A statement on his website said he was stable, his bodily functions were normal and he was being treated for blocked arteries.

Mr Talabani has struggled with his health in recent years and has often been treated abroad, analysts say.

A veteran of the Kurdish guerrilla movement, Mr Talabani, 79, is Iraq's first president from the ethnic group.

"Bodily functions are normal and the health condition of his excellency the president is stable," the statement said.

The presidency said in an earlier statement that Mr Talabani's efforts to forge a consensus in Iraq and the "consequent fatigue and tiredness" had led to a "health emergency".

A spokesman for Prime Minister Nuri al-Maliki, Ali al-Moussawi, told AP that doctors were deciding whether to continue treating him in Baghdad or to fly him abroad for medical care.

Mr Maliki is said to be at the hospital.

The president had heart surgery in the US in 2008, and was treated for dehydration and exhaustion in Jordan in 2007.

Mr Talabani has lived through decades of conflict with the central government and other Kurdish groups, including a period in exile, before the fall of Saddam Hussein.

He took over the mainly ceremonial presidency in the years after the 2003 invasion, and has often used the position to mediate between sectarian and ethnic groups.

Recently he brokered a deal between Baghdad and Kurdish groups to end a standoff on disputed areas on the border with the Kurdish self-rule area.

Mr Talabani and Mr Maliki were said to have met on Monday, and agreed to invite a Kurdish delegation to Baghdad for further talks