For Syrian Kurds, Assad or the unknown 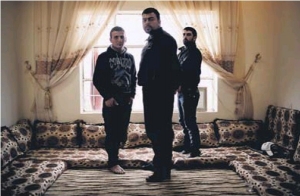 From left, Radwan Madhan al-ali, Mohammed Jafo and Rosif Mohammed Sharif Suleiman are among the Syrian Kurds who have taken refuge in Iraqi Kurdistan.

Inside a muddy village named for a failed revolt against the Syrian authorities, a history of flight and exile is repeating itself.

Over the past few months, scores of Kurds have begun streaming into Iraqi Kurdistan, fleeing security forces and the violence that is threatening to sweep Kurds from the sidelines of Syria’s uprising into its main currents.

Though the numbers have been small, the new arrivals speak to a possible change in thinking among Syria’s largest ethic minority that could potentially shift the momentum against President Bashar al-assad just as his military forces have gained an upper hand. The Kurds, a group that has long complained of repression and discrimination by the Assad regime, have failed to unify and declined to join the Sunnidominated opposition, with some concerned that a post-assad government led by the uprising’s leaders may be no better — or perhaps even worse.

Thousands of Kurds, who make up an estimated 10 percent of Syria’s 23 million people, have been willing and eager to protest decades of discrimination. They say they are prevented from speaking Kurdish in schools, denied a political voice and subject to intimidation and arrest if they speak up for their rights.

With young activists as their backbone, Kurds in Syria have formed their own opposition groups and confronted the security forces in the streets. Last October, five protesters were reportedly shot and killed at the funeral of Mashaal Tammo, a Kurdish opposition leader who many Kurds believe was assassinated by the government.

But the Kurdish activists remain divided, and so are not a full force in the drive to oust Mr. Assad. Like Syria’s Christians, many are deeply suspicious and fear that a new Sunni government will marginalize them even further. In meetings of Syrian opposition leaders, Kurdish representatives have quarreled over which rights, freedoms and powers Kurds would have — or would be denied — in a new Syria.

‘‘The Kurds in Syria have their own problems,’’ said Mahmoud Othman, a Kurdish Iraqi member of Parliament. ‘‘They are against the Assad regime. They have been for years. They have no rights. But they are not sure about which people will come after.’’

Mr. Assad has in part been able to retain support throughout the popular uprising by courting Syria’s minority groups that looked to the police state for protection. Recognizing the potential danger of a unified Kurdish opposition and a chance to exploit their divisions, Mr. Assad offered long-sought citizenship rights to tens of thousands of Kurds and invited Kurdish leaders to the negotiating table.

But Abdul Basit Sida, a Kurdish opposition leader, said that the government’s brutal response to dissent was gradually unifying Kurds against Mr. Assad, and that they were ironing out differences with Arab leaders of the opposition.

Still, mainstream Kurd opposition leaders have pledged not to fight the Assad government or join rebel fighters, for fear of drawing a lethal response from the security forces. That reluctance could blunt their role given how the government has deployed tanks, soldiers and pounding force to crush centers of dissent.

‘‘We support the Free Syrian Army,’’ said Kawa Azeri, a Kurdish exile in Iraq and an opposition member, referring to the main armed opposition group. ‘‘We have a deal with them and we are coordinating with them, but we are not fighting with them.’’

But their presence here highlights another potential ramification of the upheaval and violence in Syria, because as the refugees arrive in northern Iraq, they are discovering they are not the first.

In 2004, a riot erupted at a soccer match in the heavily Kurdish city of Qamishli, in northeast Syria, setting off clashes with security officers and days of demonstrations as Kurds vented their rage. Thousands fled the ensuing crackdown and wound up here, in a refugee camp they named Qamishli, to memorialize the violence.

Nearly eight years later, their seemingly permanent exile may offer a glimpse of the future for thousands of Syrians who have crossed into Lebanon, Turkey and Jordan, a distressing omen that the emergency along Syria’s borders could persist for months, if not years.

‘‘When I first came to Kurdistan, I thought I would stay for a few weeks,’’ said Barzan Bahram, a leader in the Qamishli camp. ‘‘I didn’t expect to live in exile.’’

The recent influx of Kurdish refugees represents the first real movement of Syrians into Iraq since the uprising against Mr. Assad erupted a year ago. The newest arrivals are young men evading conscription, soldiers deserting the army and civilians and protesters fleeing the spreading instability.

Their numbers — 100 to 500 — are a trickle compared with the thousands who have poured into other countries. The united Nations refugee agency said that there was no pressing humanitarian emergency inside Kurdistan, and that the people crossing the border had been finding shelter with families, acquaintances and other refugees. But they are living as a people apart. In Iraq, the Kurdish refugees are strangers, welcomed into refugee camps and the homes of family friends and distant relatives, but still living in limbo.

They say they hope to return should Mr. Assad’s government fall. They want to begin working to carve out guarantees so that they, like Iraq’s Kurds, could have greater rights and control over their lives. But as opposition fighters retreated from their stronghold of Homs last week, any hopes of a quick return crumbled as the state forces moved aggressively to regain control with heavy weapons, including tanks.

Kurdish officials are allowing the Syrian Kurds to stay, welcoming them on humanitarian grounds even as the officials refuse to take sides in a Syrian civil war that has turned into a global power struggle.

Iraq’s Kurdish leaders are trying to thread the needle in a bewilderingly complicated clash of political, sectarian and ethnic interests. Iraq’s Sunni Arab minority has channeled money, aid and weapons to the Syrian opposition, but many Shiites worry about new waves of violence if Mr. Assad’s Alawite-dominated government falls to a largely Sunni uprising.

Iran, Kurdistan’s powerful and increasingly besieged neighbor, is the Syrian government’s staunchest regional supporter. Turkey, a crucial economic partner for Kurdistan, is rallying behind the opposition. Yet the governments of both nations are wary that greater Kurdish autonomy in a post-assad Syria could stoke separatist movements among their own large Kurdish populations.

Syrian Kurds say more control is precisely what they want. To some, selfrule inside Syria could be a critical step toward creating a single independent Kurdistan, a long-term dream that itself complicates the regional calculus.

‘‘We are definitely seeking to obtain what Iraqi Kurds have gained,’’ said Mr. Azeri, the exiled opposition member. ‘‘I think what they have got so far is because of their long-term struggle, mass graves and chemical bombs. This is our minimum right.’’

Kurdistan’s president, Massoud Barzani, has made several overtures to Syrian Kurdish opposition groups. He invited them to Erbil, the Kurdish capital, and urged them to demand their rights as Kurds. But he has not called for Mr. Assad to step down, despite the rising death toll and broad international condemnation of the Syrian government’s brutal tactics.

The patchwork tents and cinder-block homes of Qamishli feel far removed from those questions. The new arrivals huddle in shadowy living rooms, texting their friends and checking their Facebook pages for updates from inside Syria. They worry about reprisals against their families, and wonder about the shape of their future.

Mohammed Jafo, 26, a Kurdish student at Damascus University, said he fled Syria rather than be conscripted into the army. After paying smuggler and then walking across the border, he eventually ended in Qamishli.

He is staying in the spare bedroom of a long-term exile named Adnan Yousef, who still speaks bitterly of how Syrian officials made him change his true Kurdish name — Shiro — for an Arab one. Mr. Yousef said he had a duty to take in the Kurds now fleeing Syria.