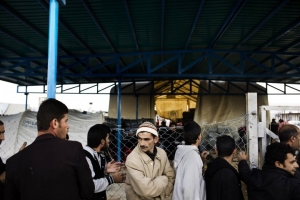 Displaced Kurdish refugees from Syria at the Domiz camp near Dohuk, Iraq, on Dec. 10, 2012

Samira Selo cradled her 2-year-old on her hip and looked across the low valley toward Syria, a country that until a month ago she called home. Some sheep and goats grazed nearby. Behind her, in the old tiny tent she, her husband and three kids call home, her family’s possessions were rolled up under two thin mattresses still damp from a week’s worth of rain. The floor of her tent was mud, the same mud that formed, often knee-deep, every lane zigzagging through the Domiz refugee camp in the north of Iraqi Kurdistan.

It is never easy being the new arrivals, especially in a refugee camp like this one, where resources have been stretched beyond their limits as more and more Syrian Kurds pour across the border each day. “Two weeks ago we had 35,000,” says Iraqi Kurdish Foreign Minister Falah Mustafa Bakir. Before Christmas they topped 60,000.

Selo, 28, and her family fled Damascus in November “as the massacre was getting too close.” But they have found life on the fringes of this mushrooming refugee camp extremely difficult. The Office of the U.N. High Commissioner for Refugees (UNHCR), which oversees the camp, ran out of tents before they got there. They borrowed their hand-me-down one from a friend but can’t afford to buy a nicer one; used UNHCR tents are going on the black market for hundreds of dollars, says Selo. When it rains — and in Iraq in the winter it rains constantly — they and everything they own get soaked. Their kids have developed colds, and the weather is about to turn frosty, something that scares Selo even more than the damp.

They could have gone to Jordan, which is much closer to Damascus, but as Kurds, they felt it was safer with their ethnic compatriots, even if it meant driving all the way across war-torn Syria. Almost all the Syrian refugees that Iraq has accepted are Kurds into Iraqi Kurdistan, a semiautonomous state in the north that exercises many of its own policies. Authorities elsewhere in Iraq have refused all but 9,000 Arab refugees for fear that the highly sectarian violence across the border in Syria may whip up similar flames in Iraq. The Kurds, though, are eager to help out their brethren, even if their resources are already stressed. So far, the Kurdish government has spent $11 million for the camp, but much more is needed. “We plan an international appeal,” Bakir says.

Aside from the tent shortage, there is also a shortage of food, especially for single men, who have their own area on the far side of the camp. Families also have a shortage of water. The newer arrivals have to share one water drum per three or four families, which doesn’t translate to enough drinking or cooking water, let alone water to bathe with. The lucky ones get one shower a week. Electricity hasn’t been a problem — there’s enough for everyone to run lights and cookers. But there’s not enough for heaters, and the chills of winter are setting in.

The main reason for the shortages is that UNHCR didn’t expect the sudden surge of refugees, says Jerome Seregni, a UNHCR spokesman. “Since December 2011, Iraq has continued to receive Syrians with an average rate of 1,000 persons monthly from April through June to suddenly 1,000 persons weekly during August to October,” Seregni says. “And although in November-December the number of arrivals was slightly decreasing, nevertheless 200 to 500 daily Syrians were registering in the camp.”

UNHCR and UNICEF have already expanded the primary school in the camp to accommodate 1,800 children, but that has not nearly met demand, so two more schools are under construction, one funded by UNHCR and one by a private donor that will accommodate 3,600 children. Unfortunately, the older children remain a question. No one knows if they will be able to attend local high schools or universities. Fanca Rashid hopes her 18-year-old son will be able to continue his university studies — he was partially through his first year when they left Damascus — but they haven’t heard anything back from the schools in Kurdistan they’ve queried. “We really hope he’ll be accepted here,” she says.

Though the conditions in their camp are more squalid than those accommodating Syrians elsewhere, in some ways, Kurdish refugees have it better than the 450,000 other Syrian refugees documented thus far by UNHCR in Turkey, Egypt, Lebanon and Jordan. Rather than being penned in, they are free to roam Iraqi Kurdistan. Some 15,000, in fact, are already in the cities of Erbil and Sulaymaniyah. Mazlum Shanki, 19, fled Syria in part because he wanted to avoid getting conscripted into President Bashar Assad’s army and in part to be an advance party for his family, who intend to move to the region. “I want to go to Erbil to make some money and bring over my family,” he says. “We love Kurdistan. We want to stay here.”

To that end, one of the biggest problems is a lack of papers for many refugees, especially those who had to leave in a rush. The Kurdish government is still debating what to do. In the past, it’s granted Kurdish ID cards to Syrian Kurdish refugees — in fact, the camp abuts a set of condos built by Syrian émigrés who settled there in 1994. But these kinds of numbers are far more daunting than the Kurdish government is used to.

Another complication is the PKK, the Turkish Kurdish terrorist group based nearby along the Turkish-Kurdish border. Rumors swell in the camp that the PKK has been recruiting, which is awkward for the Iraqi Kurdish government as it is closely aligned with Ankara. Turkey is now one of Assad’s fiercest opponents. “The Turks want us to be more active against the regime in Syria,” says Qubad Talabani, a prominent Kurdish politician. “We said, ‘Fine, come out for Kurdish rights in Syria.’” Given Turkey’s troubled handling of the Kurdish question within its own borders, that isn’t likely.

In fact, the refugees are suspicious of anything and everything except the Kurdish government in Iraq. Kurdish flags fly from dozens of tents. “I won’t fight for Assad or against Assad,” says Shanki, “but I will lay down my life for Kurdistan.” The group of men surrounding him all murmur — and some shout — in agreement.