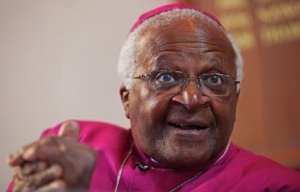 Archbishop Desmond Tutu, the chairman of a group of respected global statesmen, has reportedly called on the Turkish prime minister to take action to bring about a solution to the Kurdish question.

“I am concerned at the escalation of the conflict between the Turkish and the Kurdish peoples in which innocent young people, from both sides, are losing their lives. Peaceful negotiations are the only lasting solution to their problems; we are firmly of the view that the Kurdish question can likewise be resolved through peaceful negotiations with the genuine leadership of the Kurdish people,” Tutu, the head of the “Elders,” said in a written letter in July, according to a statement by the Kurdish Human Rights Action Group, or KHRAG, a South Africa-based organization.

Archbishop Tutu also said in his letter that he appreciated the Turkish government’s support for the people of Palestine, saying, “We regard your pronouncements as the right ones and a declaration that matters of conflicts between nations can be settled only through peaceful negotiated talks amongst apposing groups.”

Matthew Esau, the deputy president of KHRAG, told the Hürriyet Daily News & Economic Review on Tuesday that he attempted to deliver the letter to the Turkish Embassy in London, but was told by a policeman that he was not allowed inside. Esau said Tutu will work as an advisor to his organization.

KHRAG has been linked to the outlawed Kurdistan Workers’ Party, or PKK, which is listed as a terrorist organization by Turkey, the United States and the European Union.

Sarel van Zyl, the charge d’affairs at the South Africa Embassy in Ankara, told the Daily News that he does not have any information about the letter. The Embassy issued no further comment on the matter.

The “Elders” is a group of veteran statesmen, including former U.S. President Jimmy Carter. The group has previously paid visits to Cyprus to encourage peace talks on the divided island.

“We hope to influence Turkish authorities’ attempt to find an answer to the Kurdish question and we have suggested a similar process to that which happened in South Africa. We have also suggested the release of those who are in prison, like Abdullah Öcalan,” Esau said, referring to the jailed leader of the PKK.

The KHRAG deputy president added that the group calls on both Turkish authorities and the PKK to declare a cease-fire in order to negotiate a solution.