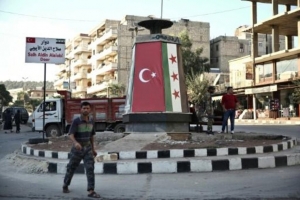 Turkish Intelligence orders proxy factions to close entrances and exits of Afrin, and prevent media activists from entering the city

According to Syrian Observatory sources, the decision was circulated to all the checkpoints around the city of Afrin, in addition to a decision preventing the entry of any media activist from outside the area to Afrin during this period, without knowing the reasons for the decision. This coincides with the third anniversary of Turkish forces’ control, supported by the proxy factions, of the city of Afrin and its surrounding areas in the north-western Aleppo countryside, and as Nowruz Day approaches.