An Interview with Nechirvan Barzani: Will There Be an Independent Kurdistan? 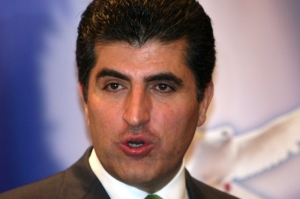 Nechirvan Barzani speaks during a press conference in the northern Iraqi city of Erbil on Nov. 26, 2012.

If there is one man who deserves the credit for the growing Turkish-Kurd rapprochement, it’s Prime Minister Nechirvan Barzani of Iraqi Kurdistan. Five years ago Kurds and foreigners alike laughed in his face when he told them that not only did he want Iraqi Kurdistan to export its own oil, but that he wanted to export it to Turkey, which has had an intractable problem with its own large Kurdish minority. Barzani’s strategy was one of patience: starting with confidence-building with the Turks and then coaxing small oil companies and then larger ones to risk Baghdad’s ire to drill for oil not only in the autonomous region but in territory disputed by both Barzani’s government and the Iraqi central government.

Barzani sat down with TIME on December 13 to talk about the Turks, his stormy relationship with Iraqi Prime Minister Nouri al-Maliki and the potential for an independent Kurdish state–and how that would affect members of the non-Arab ethnicity, which lives in Iraq, Turkey, Iran and Syria. He spoke sometimes in English and other times through the translation services of his Foreign Minister Falah Mustafa Bakir. Below are excepts from that interview:
TIME:My understanding is that the people laughed at you when you first suggested that Kurdistan drill and export its own oil. True?

Barzani: That’s true [laughs]…. We started with small projects. Small companies. I mean of course always we’ve been accused of bringing small companies but now we have big companies like Exxon Mobil, Chevron, Total, Gazprom. It has been changed a lot. The total investment so far in spending has been about $15 billion. $15 billion they spending in this country. It’s a lot of change. But of course we have a long way to go – this is not all. So the first company that we started with was a Norwegian Company called DNO. Of course at the beginning there was a huge campaign on me personally as well [saying that] I’m corrupt, I’m benefiting from this personally, stories about me personally. But I resisted and ignored all these accusations and we continued the path.

Barzani: That’s a joke [chuckles]. No, really, that’s a joke. First of all everybody knows and realizes Turkish policy. Turkish policy is against any Kurdish independence, I mean it’s obvious. So this is the fate that we have been given. Turkey has always had that power, that authority to militarily stop us. I will gladly say the opposite. What threatens Iraq’s integrity is the performance of Prime Minister Maliki in Baghdad. Maliki wants to utilize that campaign against us. We have a door of hope, which is Turkey. And if that door, that hope is closed, it will be impossible for us to surrender to Baghdad. We will do something that will put in danger the interests of all those concerned.

TIME: Is it ironic that you’re pinning your hopes on Turkey, given how badly they have treated the Kurds in the past?

Barzani: Things have changed in Turkey. It’s very simple. Turkey needs something that it doesn’t have. We need certain things that we don’t have. This has been the proper understanding on both sides. And it doesn’t have anything to do with politics. It’s an economic matter. They would like, and we would like likewise, to achieve progress. Because Turkey is a very important country for us. Of course if we are able through economic cooperation to further develop this relationship, we will certainly do it.

TIME: You have a large number of Iraqi troops mustered at your border, could this turn into a war?

Barzani: They are not far from each other, the forces. But let me discuss that in a different way. Unfortunately, Prime Minister Maliki wants to create tension in these areas. We sent our own delegation to Baghdad. They had a memorandum of 14 points. Our military forces and the Iraqi side, both sides of the military they had agreed on that. And we were pleased that this would be implemented and the problem would be solved. When we went to Maliki he rejected all of that. So the point is in what way he moves to solve the problems? The way we see it his is more interested in sorting out the differences through violence. The areas that are called the disputed territory, this is a very sensitive issue for KRG, for Kurdish. It’s extremely sensitive. When we agreed to all these 14 points he rejected it. We don’t know what formula that we use to create an understanding. But of course we’re expecting these things to happen. We knew that after the withdrawal of the American troops, things would change and this would be a normal thing to happen in Iraq. America came to this country, spent huge amounts of money and have sacrificed lives. But they handed over the keys to others.

TIME: To the Iranians?

Barzani: I said to others, okay [laughs]. Whatever problems, whatever you like, they have left all these problems behind. I’ll pose a question: Why did you come to Iraq? What’s the reason? If the only intention was to hand over Iraq’s keys to others, then why did you come? Why? This is really the question for Americans. Therefore, America is also responsible for the situation and what happens now. There is a moral responsibility on the United States. Because until the last moment when then Americans were here they did not help us to solve these problems. And they knew that these were problems that would linger. How does Baghdad act? Baghdad believes or perceives that they will be stronger, but especially I’m talking about Prime Minister Maliki, he’s waiting for F16s and M1 tanks, and being in that strong position to come and talk to us. To impose a solution on us. Imposing any kind of solution would create a problem on the ground. There has to be an agreement, a compromise. We are ready for that. We know that we cannot solve this problem through who’s strong and who’s weak. Ok, we have to be ready for compromise, both sides. And we as the KRG are ready for that, we’re ready for dialogue, for compromise, for talk, for everything.

TIME: Will there come a point where you feel you can no longer bargain with Maliki and it’s better to be on your own?

TIME: Also for Turkey, the PKK are here. Is that awkward? For them, for you, for the Turks?

Barzani: Regarding that, it’s only the issue of the PKK. Turkey has to understand one thing: this is a political question. It cannot be solved militarily. There has to be a political decision to solve this question. We have continuously raised and discussed this issue with Turkey. Always. And we will continue to do so. We are attempting to play a role so that there will be a political solution for this question.

TIME: Did you imagine five years ago that you would be receiving heads of state here? That Kurdistan would have come so far as an independent region?

Barzani: Five years ago, it was so difficult, really. Five years or more, it was difficult to expect that, really. Because I remember, Turkey especially, they had 200,000 troops on the border. They threatened us, we will enter here. And instead of that right now we have almost $8 billion in trade with Turkey. Only with the KRG. And the major Turkish companies in construction, in other areas, they are active here. And for the opening ceremony of the new Erbil airport Prime Minister Erdogan, he came here. So, it’s a big change. It’s a really big change in terms of the relationship with Turkey.

TIME: Is it possible to say that you are closer than ever to an independent Kurdistan?

Barzani: I believe, yes, we have a very good opportunity. But we have a lot of challenges as well. How we can – I mean an independent Kurdistan – first of all we have to convince at least one country around us. Without convincing them, we cannot do this. Being land locked we have to have a partner, a regional power to be convinced and internationally, a big power to be convinced to support that. What we want right now is to have an economic independence within Iraq. And the biggest threat on Iraq’s unity is Prime Minister Maliki. Because Prime Minister Maliki is acting very unilaterally and as a one man show. This will not help to solve Iraq’s problems. The Kurdish concern about Maliki is not only the Kurdish concern. It you go talk to any Shi’a, Turkman, Sunni, they have exactly the same concern about the Prime Minister. This is the reality. Everybody is unhappy with the performance of the prime minister.