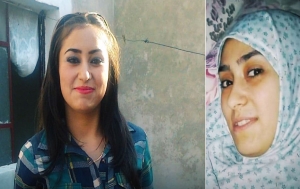 Valentina pictured before and after her abduction. Photo submitted by the Human Rights Organization.

ERBIL, Kurdistan Region —  The family of a Kurdish woman kidnapped by Turkish-backed armed groups in Syria hold out hope of seeing their daughter again, despite months of uncertainty over her wellbeing.

Valentina, 24, was one of many women kidnapped from Afrin in March 2018, when Turkey and its Syrian proxies invaded the area, displacing hundreds of thousands of people.

Her parents now live in Shahba, home to Internally Displaced Persons (IDPs) who fled the Turkish invasion. The enclave, under the control of the Kurdish People’s Protection Units (YPG) is surrounded by Syrian regime and Turkish forces.

When Rudaw English contacted Valentina’s parents on Saturday, they hoped to hear good news about their daughter, who is said to be held by the Hamza Division – a group affiliated to the Turkish backed Syrian National Army.

“We have not heard from Valentina for seven months,” her father told Rudaw English via phone.

Valentina called her parents in late 2019 and told them that she was being held in the rebel-held town of Kafr Nablm in Idlib province. She has not been heard from since.

Her parents have not been named due to fear of reprisals, with local human rights officials saying the family live in fear following threats from various groups.

“We appreciate anyone’s help to find her. We really want her [back],” her father added.

Ibrahim Shekho, spokesperson for the Afrin-based Human Rights Organization-Syria told Rudaw English that militants had filmed themselves sexually abusing Valentina and sent the video to her family, including her husband- who was also held by militants following the invasion.

Her husband has returned to Turkish-held areas of Afrin with their two children and has since remarried, but has not inquired about the whereabouts of Valentina since watching the video, Shekho added.

Turkish-backed groups have been widely accused of human rights abuses against Afrin’s locals, including kidnap, looting and extortion.

In its annual report for 2019, rights group Amnesty International documented a “wide range of abuses” against Afrin’s civilians at the hands of Turkish-backed groups, including the arbitrary detention of more than 50 locals.

Women in particular have been singled out for abduction. Several women were found held captive in at the Hamza Division's headquarters at the end of May, with Hamza officials saying the women had been held at the site for “one to two years.”

Many members of Afrin’s dwindling Yezidi community have also been abducted.