With the help of factions’ leaders,Turkish-held areas turn into breeding ground for hashish cultivation and drug business 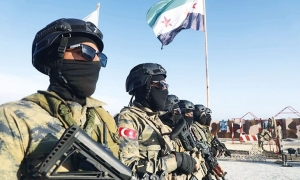 There is much evidence proving the direct involvement of some Turkish-backed commanders in drug dealing and “Hashish” cultivation and trafficking.

“Al-Sultan Murad Division” has cultivated 9,000 acres of agricultural land with “hashish” in Rashu Atyah in Ras Al-Ain area in the northern countryside of Al-Hasakah, which is under the control of Turkish-backed factions. This agricultural land is originally owned by people who have been evacuated and forced to displace by Turkish-backed factions, SOHR sources reported.

According to SOHR sources, residents of a family still living in that area provided an “opposition organisation” with photos of land planted with hashish.

Meanwhile, factions prevent civilians from approaching this agricultural land, at orders by commanders of the Turkish-backed “Al-Sultan Murad Division,” one of the most prominent factions operating under the banner of the “National Army.”

A 67-year-old woman known by her initials as H. T. who lives in Ras Al-Ain countryside and has refused to displace, says “I follow up on what is happening in Rashu Atiyah village, as I always go there to inspect farmlands and properties of my relatives who were displaced during the Turkish military operation in 2019.”

The old woman adds that Turkish-backed factions, such as “Al-Sultan Murad Division,” prevented her, the residents and the displaced people who have been settled in the area from approaching the village which has been turned into a military zone.

“I was nearly hundreds of meters far from the village when I watched, using binoculars, a green plant growing to the north of the village which consists of fewer than 30 houses. I sent my 28-year-old son to identify these odd plants and find out what was planted there, then he returned and told me that Turkish-backed factions had planted hashish in the village, and to cover up their practices, they prevented everyone from getting closer to this area,” the woman said.

In her testimony to SOHR, a displaced woman from Rashu Atiyah village known by her initials as K. A. who lives now in Al-Qamishli city, said that a woman in a nearby village sent her pictures showing small green spaces on the outskirts of the village. She suggested that these areas were planted with hashish because it was not the season of wheat, cotton or yellow maize. One of the woman’s acquaintances living in that region confirmed that “Sultan Murad Division” planted with hashish a farmland of an estimated 125 acres belonging to her husband who is known as S. A.

Meanwhile, a man known as R. A. told SOHR that he received frequent calls from his Arab neighbours who stayed in their areas in Ras Al-Ain countryside in “Peace Spring” area, informing him that members of “Sultan Murad Division” planted all farmlands in the village with wheat and yellow maize, and then they stole the harvest. Some other neighbours told the man that the faction may have planted hashish in the village, as the faction prevented the region’s residents and shepherds from approaching from the area from the north of the village to the Syria-Turkey border.

Speaking to SOHR, a journalist known by his initials as A. A. living in Azaz town in the northern countryside of Aleppo says, Turkish-backed factions claim that they counter drug promotion in areas under their control through launching security campaigns which have led to arresting of many drug dealers and seizing large amounts of drugs stored by these dealers. However, many residents believe that these campaigns are fake and that the arrested dealers are released a short time after being arrested. There are cooperation and strong ties between Turkish-backed commanders and drug dealers. The most prominent factions involved in such illegal business are ‘Al-Jabha Al-Shamiyyah’ and ‘Sultan Murad Division.’ Drugs have become readily available and they are sold publicly on many occasions, and this is evidence proving that the factions have no serious intention to putting an end to drug business and eliminating dealers. Another evidence is manifested in the escalating proliferation of drugs and increasing number of dealers, despite the factions’ claims of prosecuting them.”

The activist has noted out that reports circulated recently about storming plants for manufacturing drugs and seizing large shipments en route to neighbouring areas, such as Turkey, SDF-controlled areas and HTS-controlled areas, amid reports of involvement of prominent figures, including commanders of “Al-Sham Corps” and the leader of “Sultan Murad Division.”

The journalist suggests that most funds and resources of the Turkish-backed factions’ commanders depend on illegal activities, mainly drug business, plantation of hashish, smuggling operations and thefts. The man clarified that drug business prevails in broad areas in the northern countryside of Aleppo where drug abuse by young men, especially Turkish-backed militiamen, has become a rampant phenomenon.

On the other hand, a former member of “Suleiman Shah Division” known by his initials as A. M. living in northern Idlib has commented on the phenomenon of drug abuse and the ways of promoting drugs by some factions and commanders. The young man has told SOHR, “there are farmlands in several towns and villages in the northern countryside of Aleppo specified for planting hashish. These farmlands are under supervision of commanders of several factions, including ‘Suleiman Shah Division’ in Sheikh Hadid district (Shiya). Illicit pills and hashish are sold by civilian dealers affiliated with Turkish-backed factions which protect them. When any of these dealers is arrested, he will be released as soon as he pays money. Drug abusers can also get drugs secretly from militiamen, individuals selling takeaway drinks on highways and street vendors selling tobacco. Moreover, drugs are smuggled to regime-controlled areas via routes under the control of the factions. Hashish is widely available and planted in several places. Besides, a large number of militiamen have different types of illicit pills, including hallucinogens and tramadol, which leads to addiction.”

On July 14, “Tha-Eroon Le Al-Tahrir” (Uprising for Liberation) posted a video footage showing two persons confessing to involvement into drug business in areas in north Aleppo countryside and dealing with a member of the Lebanese Hezbollah who deliver drugs to areas under the control of Turkish-backed factions from Nebl and Al-Zahraa cities via routes used for smuggling. According to “Tha-Eroon Le Al-Tahrir,” large amounts of drugs estimated to be nearly 50 kilograms were confiscated.

While on 21 May, Turkish-backed factions launched a large-scale security campaign, targeting drug dealers in areas under their control. According to the so-called “Counselling Directorate” of the Turkish-backed “National Army,” 15 drug dealers were arrested during the campaign, as well as confiscating large amounts of drugs.

Hayyaat Tahrir Al-Sham (HTS) had confiscated several drug shipments en route to areas under its control near the crossings of Al-Ghazzawiyah and Deir Ballout separating HTS-held areas in the northern countryside of Idlib and areas controlled by Turkish-backed factions in west Aleppo countryside. On March 26, HTS-backed “General Security Service” seized a shipment of drugs and hashish, while being smuggled through Al-Ghazzawiyah crossing. The shipment was hidden in a blue car, “Hyundai” make, carrying cars spare parts and comprised 11 kilograms of hashish and three kilograms of captagon.

Similarly, on February 12, HTS seized a large drug haul of more than one million illicit pills while being smuggled through Al-Ghazzawiyah crossing. The smugglers confessed that they intended to deliver this shipment to Kherbet Al-Jouz area in the western countryside of Idlib and that they succeeded to smuggle similar shipments earlier.

The most prominent incident which proved the involvement of commanders of many factions in drug business took place on October 3, 2021, when the military police of the “National Army” stormed a plant for manufacturing drugs in Burj Abdalu village near Al-Basoutah town in the northern countryside of Aleppo. Clashes erupted between the military police and workers in the plant and lasted for two hours, before the police arrested four workers and closed the plant. According to sources, the plant was owned by a man known as “Abdo Osman” who worked for the military leader of “Al-Hamza Division” “Abdullah Halawa,” while the plant was funded by relatives of “Abdo Osman” known as “Tareq Zaazaa” and “Belal Zaazaa” living in the Turkish city of Mersin.

It is worth noting that narcotics and drug business are not confined to a specific area in Syria, as they have alarmingly escalated since the beginning of the Syrian revolution throughout Syria because of the deteriorating security situation and the large number of conflicting bodies. Recently, large drug shipments have been smuggled from regime-controlled areas, areas controlled by Turkish-backed factions and others controlled by jihadist groups to neighbouring countries.