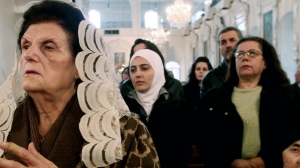 Christians and Muslims offer prayers for nuns held by rebels, at a Church in Syria. (Photo: Associated Press)

ERBIL (Kurdistan 24) – During a virtual hearing on Wednesday, senior members of the official US commission charged with monitoring international religious freedoms praised the religious diversity in the Syrian Democratic Forces (SDF)-held northeast of Syria compared to areas under Turkish or Syrian regime control.

Gayle Manchin, Vice Chair of the US Commission on International Religious Freedom (USCIRF), underlined that they “have seen religious freedom take root and Syria’s remarkable diversity flourish (in the northeast of Syria).”

Muslims, Yezidis, and Christians “can express their faith freely and openly, including converts from other traditions,” she added. “Even the non-religious have a safe haven—a true rarity in the region.”

“It is noteworthy that when religious and ethnic minorities fled Turkey’s takeover in Afrin in early 2018, most of those displaced persons sought and found safe refuge there in AANES (Autonomous Administration of North and East Syria) territory.”

A report by the State Department on religious freedom in Syria on Wednesday underlined similar concerns and noted that the Yezidi religious minority “previously lived in Aleppo, but now live mainly in northeast Syria areas controlled by Kurdish-led Syrian Democratic Forces (SDF).”

It also added that “religious minorities displaced by the Turkish and TSO (Turkish-backed opposition groups) seizure of Aleppo’s Afrin District remained unable to return to their homes.”

Moreover, the report said that following Turkey’s October 2019 operation in Tal Abyad and Ras al-Ain “humanitarian observers believed many ethnic and religious minorities were hesitant to return (to areas under Turkish control), given a pattern of intimidation by Syrian groups aligned with Turkey.”

Nevertheless, Manchin also recognized that the SDF and the local administration has its own interreligious and interethnic problems.

“Christian communities have complained of the role of Kurdish nationalism in local school curriculum, for example, and some ethnic Arab tribes have been wary of closely cooperating with authorities who they perceive as Kurdish-dominated.”

But Manchin noted that the administration and SDF have made substantial progress, citing a recent Pentagon Inspector General (IG) report covering the first quarter of 2020 (Jan. 1 to March 31) that recognized those concerns, while also noting that the SDF made great progress in incorporating Arabs and Syriac Christians “into military and political deliberations.”

She underlined that the “openness among authorities in northeast Syria to promote religious freedom and to improve its own inclusivity stands in stark contrast” to other areas.

“These successes also stand in stark contrast to the poor conditions in territory that has fallen under the control of the Turkish military and its allies inside Syria,” Manchin concluded.

Meanwhile, USCIRF Vice Chair Nadine Maenza noted that “Turkey and its allies, “many who are known former members of ISIS and Al-Qaeda who are now in Turkey’s Free Syrian Army, invaded and seized control of Afrin (in 2018), a religious and ethnically diverse area in north-central Syria, that was at the time under the control of the AANES.”

The occupation in Afrin “established a deeply disturbing precedent for what was to come” in October 2019 when Kurds, Christians, and Yezidis were “chased from their homes,” and their sacred sites “desecrated and destroyed.”

She added that she visited northeastern Syria in 2019 and saw herself the “devastation brought upon the Christian villages near the areas Turkey had invaded.”

“I met with religious and community leaders and heard about the remarkable religious freedom conditions under the AANES, and how that is non-existent in the area Turkey occupies.”

It is for these reasons that the USCIRF’s annual report in April called on the US government to pressure Turkey to leave Syria due to human right violations in areas under its control.

Maenza warned that “Turkey is now threatening the crucial population centers of Kobane and Qamishli, even as it has used the world’s nearly complete inattention to forcefully repopulate abandoned towns with refugees from other parts of Syria—just as it had done in Afrin.”

“The United States cannot look the other way as this disaster unfolds.”