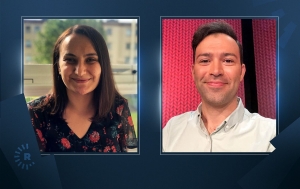 Seher Ayder, a member of the Red Party, and Labour Party member Mani Hussaini will both enter the Norwegian parliament, Storting.

“Thank you to everyone who voted for us, everyone who has lined up, distributed flyers, called, texted, and talked about Red [party],” Ayder said in a Facebook post. “We have made history and this is just the beginning.”

Ayder, 32, was born in Turkey and grew up in Fredrikstad, Norway. She has a background in the Women's Front, Norway’s main feminist organization, and has led several projects including a ‘Solidarity with Kurdistan’ campaign. She is the first deputy representative in the supreme legislature of the country.

Hussaini, 33, posted a thank you message, adding that the job begins now.

He was born in Rojava’s Qamishli. His family first sought asylum in Sweden and moved to Norway in 2001. He has been the leader of the Workers' Youth League since October 2014.

Labour leader Jonas Gahr Store is set to be the next prime minister and his party is working to form a governing coalition with other left-leaning parties.

There are an estimated 25,000 to 30,000 Kurds in Norway, most fleeing their homes because of war or political instability.