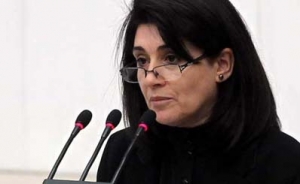 (Reuters) - Kurdish parliamentarian Leyla Zana, a former Nobel Peace Prize nominee, was sentenced to 10 years in prison by a Turkish court on Thursday for spreading militant propaganda in a series of speeches she made over four years ago, court officials said.

She was convicted of disseminating propaganda for the Kurdistan Workers Party (PKK) guerrilla group, which has fought a 28-year-old insurgency against the Turkish state in which more than 40,000 people have been killed.

Zana had already been convicted for the same nine speeches she made in 2007-2008 at news conferences and public meetings, but her conviction was overturned by an appeals court on the ground that she had not had an adequate opportunity to defend herself.

She was given a fresh trial in the main south-eastern city of Diyarbakir, resulting in Thursday's 10-year jail sentence.

As an MP, Zana enjoys parliamentary immunity, so her conviction will not take effect until she leaves parliament. The next election is set for 2015.

Zana rose to prominence in 1991, causing uproar in Turkey's parliament by speaking in Kurdish at her oath-swearing ceremony.

A state security court convicted her in 1994 of having links to PKK militants and imprisoned her. She was not released until 2004 after the appeals court overturned her conviction and that of three other Kurdish former lawmakers.

The PKK is designated a terrorist group by Turkey, the United States and the European Union.

At a parliamentary election last June, Zana was one of 36 Kurdish-backed candidates who won seats in the 550-seat assembly.

In recent years, the government has pushed through cultural reforms to improve the rights of the Kurdish minority, which was subject to assimilation policies for decades.

But Zana and other Kurdish politicians are pushing for political autonomy in the mainly Kurdish southeast of Turkey.