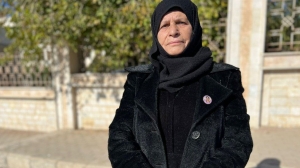 In the hospital in Derik, Syria, the air is thick with the sound of shouting and crying. There are muffled sobs as women hold each other tightly. One helps another to stand upright, as tears threaten to send her to her knees.

In the hospital in Derik, Syria, the air is thick with the sound of shouting and crying. There are muffled sobs as women hold each other tightly. One helps another to stand upright, as tears threaten to send her to her knees.

The supporting woman explains that her friend's brother was killed in last night's air strikes on this part of north-east Syria.

He was working inside the electricity station that was fired on by a Turkish warplane. "He was so young", she says. Grief is everywhere here.

Outside the street is filled with cars. Inside, the hospital foyer is thronged with people.

One of them is Souad Khalaf. Her daughter Hevrin was a noted Kurdish politician who was shot dead along with her driver when their car was ambushed in October 2019.

It happened days after Turkey launched a ground incursion across the border into Syrian territory.

"At midnight we heard loud noises around Taqil Baqil village, where the power station is," she explains. "Then we lost our electricity. We couldn't sleep because of the bombing. In the morning we heard about all the people who were killed and injured. Two of the dead were my relatives."

Pinned to Souad's black coat is a small pink badge. It shows a picture of Hevrin's smiling face, atop a jasmine flower.

"All the European and international countries can see what Turkey's President [Recep Tayyip] Erdogan is doing to us and our people but nobody is doing anything," she continues.

"Even if he does manage to take over our land, we will still be Syrians. But we don't understand why nothing is being done, even though Turkey is killing us. We call on everyone, and on human rights groups, to stop this aggression against us."

Turkey's air operation came a week after six people were killed in a bombing on Istanbul's busiest shopping street, and 80 more were injured. They too were civilians, ordinary shoppers enjoying the festive atmosphere with their families.

In the first hours after the attack CCTV pictures emerged showing a woman sitting on a bench on Istiklal Street before tucking a bag underneath it. Minutes after she moved away it exploded.

Later that night, Istanbul police made an arrest. A official video was released showing a woman being held on the floor by armed officers and led away.

They announced that she was a Syrian named Alham Albashir, affiliated with and trained by the PKK - the Kurdistan Workers Party. A Kurdish separatist group, it has a history of attacks in Turkey. Before the sun rose the next morning, Turkish officials had - they said - identified and apprehended their main suspect.

But critics of the Turkish government were uneasy. They pointed to a lack of concrete evidence about the woman's background, and wondered whether the solution they were being presented with was all too simple?

Social media threads focused on her features, insisting that she didn't look Kurdish. The Turkish authorities say she was found and detained at her place of work, a garment factory. They didn't elaborate on why someone who'd been trained to carry out a high-profile attack would take a taxi through CCTV-lined streets to such a seemingly obvious location.

The PKK denied any involvement. So did the SDF, the Syrian Democratic Forces. Today their media officer Siyamend Ali is surveying the damage in Syria.

"Everybody knew that we had nothing to do with the attack in Istanbul, we condemned it," he says. "That's not what we do as the SDF. We fought against ISIS [the Islamic State group] here, but Turkey is looking for a reason to justify their attacks against us. This only benefits Erdogan and his regime, to make excuses for their operations in our region. Last night they killed 11 civilians, and the SDF lost some of our fighters".

In just 24 hours, the mood in Derik has changed noticeably. Yesterday the cafes were full of people, the market busy and bustling. Today those same locations are almost empty.

There's a real sense of nervousness. People feel like anywhere could be a potential target, so they're avoiding places where they feel vulnerable. Even official-looking cars on the open road are being given more space than usual, with drivers fearing they could be caught up in a strike.

Randil is 38. He's sitting behind the counter in his small shop, surrounded by colourful packets and tins piled on shelves all the way up to the ceiling. Today, simply being there is making him worried.

"At midnight we could hear the jets flying over us," he recalls. "I ran up to my roof and I could hear the rockets landing very close, then our whole area lost electricity.

"I have four children, when the noise of the bombing woke them up and everything was in darkness they were so scared. They were crying. We didn't know how to deal with them, we talked to them and lit some fires and tried to calm them down.

"Turkey isn't targeting the military bases of the SDF. They're targeting us civilians. And they would never do something like this if they didn't have the green light from the Americans first."

The Turkish defence ministry announced that Operation Claw Sword had destroyed 89 targets in line with its self-defence rights, and "many terrorists were neutralised" in northern Syria and Iraq. The SDF say civilian infrastructure was hit - as well as the power station serving dozens of villages, a disused hospital in Kobane and two grain silos were targeted.

Sometime around June of next year, Turkey will hold crucial elections. President Erdogan goes into them in a weaker position with the Turkish public than he's held in years.

An ongoing financial crisis has left the population jaded and struggling, and many of his former supporters are looking for a fresh answer to their problems.

It's against this backdrop that Mr Erdogan is being "tough on terror". In May 2022 he announced that he was about to launch a fresh ground incursion into northern Syria, the fifth of recent years. And hours after the latest air strikes his chief adviser, Ibrahim Kalin, tweeted a picture of a fluttering Turkish flag alongside the words "It's reckoning time for Istiklal."

Is this a calculated effort to shore up popular support for Mr Erdogan's leadership?

One thing is beyond debate and speculation. Families in both Turkey and Syria are now grieving senseless losses. Civilians are living in fear of terror attacks and airstrikes. And many believe now is the time for world leaders to pay far closer attention to what's happening in this part of the Middle East.