Tariq Aziz: 'Britain and the US killed Iraq. I wish I was martyred' 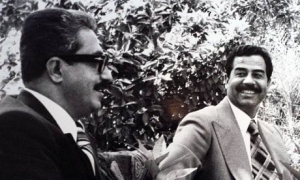 The old days … Tariq Aziz with Saddam Hussein. ‘I will not speak against Saddam until I am a free man,’ said Aziz. ‘When I can write the truth I can even speak against my best friend’ Photograph: ISF

Tariq Aziz is slumped on a tattered brown sofa seat cradling his walking stick and cigarettes, his gaunt face topped, incongruously for a practising Christian, by a Muslim prayer cap. It is perhaps only the familiar black-ringed spectacles that signal to the visitor that this was Iraq's former face to the world – Saddam Hussein's right-hand man, his most powerful deputy.

Apart from his captors and lawyers, Aziz, says he has not seen or spoken to a foreigner since the fall of Baghdad. But after years rotating between solitary confinement and a witness box in court, he is now more than ready to speak.

"It's been seven years and four months that I have been in prison," he told the Guardian. "But did I commit a crime against any civilian, military or religious man? The answer is no."

Iraq has been through hell since Aziz was last seen in public, days before Baghdad fell in April 2003, toppling Hussein and the totalitarian Ba'athist regime that Aziz had helped lead for 30 years.

In his first face-to-face interview since then, Aziz seemingly longed for the old days, while at the same time calling on the US president, Barack Obama, not to "leave Iraq to the wolves".

"Of course I was a member of the Revolutionary Command Council, a leader of the Ba'ath party, deputy prime minister, foreign minister – all of those posts were mine," he says inside the Iraqi prison that he now calls home. Aziz had just returned from another court hearing inside Baghdad's green zone, where the ghosts of Iraq under Saddam are being exorcised in a series of painstaking trials.

However, he claims that he was powerless to stymie the will of the leader he served, and that none of the blood on the regime's hands was also on his.

"All decisions were taken by president Saddam Hussein. I held a political position, I did not participate in any of the crimes that were raised against me personally. Out of hundreds of complaints, nobody has mentioned me in person."

Aziz is serving a 15-year sentence for one conviction for a crime against humanity, but faces many more charges. He claims he is being convicted because of guilt by association, and that he is nothing other than an Arab nationalist loyalist.

"Being a member of the government, I had a moral responsibility to defend the government," he said. "If you go back to the history, I asked Saddam Hussein not to invade Kuwait, but I had to support the decision of the majority.

Aziz's influence after the 1991 Gulf war rose substantially, largely because of the loyalty he had shown. Through 12 years of sanctions and the lead up to the Iraq invasion in 2003, he claims he knew every one of the regime's secrets – including that there was no secret weapons program, and no will to resurrect one from the ruins of Iraq's three bombed nuclear reactors and adjoining research laboratories.

He said that he and Saddam were convinced that the US was going to invade by late 2002, and his job of escorting sceptical UN inspectors around Iraq was largely futile. "I was trying to prove a negative."

Aziz says the events of 9/11 were shocking to him and Saddam.

"We were against that at the time, but we were not speaking to the American government. Saddam Hussein called me and said he would like me to write a letter to Ramsey [Clark, a former US attorney general] and say that we condemn the attack. I did that."

But he did not foresee that that day would lead to the fall of Baghdad 18 months later.

"Some things became clear to both myself and the president as the world leaders increased their rhetoric against us. They were going to invade anyway.

Via his TV, Aziz monitors developments in Iraq, which he says will be better off if it is returned to rule by an Arab strongman. "There is nothing here any more. Nothing," he says. "For 30 years Saddam built Iraq, and now it is destroyed. There are more sick than before, more hungry. The people don't have services. People are being killed every day in the 10s, if not hundreds. We are all victims of America and Britain. They killed our country."

When asked why Saddam kept the US guessing about his weapons programme, he confirmed the dictator's account to his captors that he had been playing to Iran, not to the west. "Partially, it was about Iran [the deterrent factor]," Aziz said. "They had waged war on us for eight years so we Iraqis had a right to deter them. Saddam was a proud man. He had to defend the dignity of Iraq. He had to show that he was not wrong, or weak.

"Iran was our biggest enemy. We had to defy them whatever the cost. Now Iran is building a weapons programme. Everybody knows it and nobody is doing anything. Why?"

Pressed on whether pride over wisdom had been a main factor in his country's destruction, Aziz replied: "We are Arabs, we are Arab nationalist. We must be proud."

He will not, at this point, concede any serious regrets, although he clearly harbours some. The time to talk about wrongdoings will only come if Aziz is freed, a possibility that appears to hinge heavily on a change of government.

"Tell Tariq Aziz that he is my friend and I think of him often," said Iyad Allawi, the lead candidate to replace Nouri al-Maliki as Iraq's prime minister, when told that the Guardian would soon be speaking to him. "He is a good man and I know his family well. I wish him all the best and it is wrong to lock him up like this for so long. He is an old man."

Aziz says he will not pass judgment on his former boss, Saddam, until the day when his freedom comes.

"If I speak now about regrets, people will view me as an opportunist. I will not speak against Saddam until I am a free man. Wisdom is part of freedom. When I am free and can write the truth I can even speak against my best friend.

"I don't say that I am a great man and that I was correct in everything that I did. But I am proud of my life because my best intention was to serve Iraq. There were mistakes though, there were things that were not completely correct."

The one regret he will talk about is his decision to surrender to the US on 24 April 2003. He had, days earlier, bade farewell to Saddam in a house in the Baghdad suburb of Mansour. "I told him I support what he has done and I support him as president. Then I said goodbye.

"Through an intermediary, I contacted the Americans. If I could return to that time, I wish I would be martyred. But the war was here and Baghdad had been occupied. I am loyal to my family and I made a major decision. I told the Americans that if they took my family to Amman they could take me to prison. My family left on an American plane. And I went to prison on a Thursday."

Aziz is full of praise for his jailers, in particular a young warden who lights his cigarettes for him, places his medicine on a table and allows him a weekly phone call to his family in Jordan.

"The conditions here are excellent," he says in an air conditioned office adjacent to his cell in a north Baghdad suburb. "The treatment from these guys has been excellent and I'm not just saying that. It is clean, the food is good and there is a small garden nearby where we can exercise."

Pressed by one of his jailers on how his conditions compared with the conditions that prisoners during Saddam's regime faced, Aziz would only say: "Yes, there were some mistakes made."

Aziz has a perhaps surprising request of the US commander-in-chief, whom he initially welcomed as a clean break from George W Bush. Aziz now wants the occupation to continue.

"He cannot leave us like this. He is leaving Iraq to the wolves," he said. "When you make a mistake you need to correct a mistake, not leave Iraq to its death."