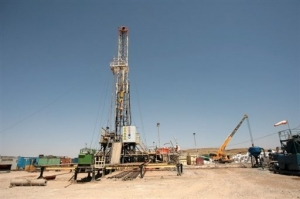 An oil drilling platform near the village of Taq Taq in Kurdistan.

"The signing of this contract is against Iraqi law and its constitution," Shahristani told Ha Tae-yun during a meeting in the capital, according to a statement.

"For that reason these two companies have been prevented from taking part in tenders. If these companies cancel this contract they will be able to take part in the next contract tender," the statement said.

Five of the fields are located near the capital Arbil in northern Kurdistan.

The South Korean companies secured nearly two billion barrels of oil in return for pledging to invest 2.1 billion dollars in the development of the region's infrastructure.

The deal went ahead despite protests from Iraq's central government about other exploration projects in Kurdistan that have not been approved by Baghdad.

The strong-arm tactics come amid a continuing feud between Baghdad's Shiite led central government and Arbil over the sharing of the nation's oil wealth.

The disagreements between them over oil rights have held up exploitation of much of the massive estimated reserves as well as long-delayed legislation on overall hydrocarbons law.

In January, Iraq suspended an annual contract with South Korea's top oil refiner to export 90,000 barrels a day after Seoul agreed with Kurdistan to explore the Bazian field -- believed to contain 500 million barrels.

Falah Mustafa, foreign minister of the Kurdish government, was furious at Thursday's announcement.

"These contracts are not illegal and unconstitutional. We are very upset with Shahristani's statement. He better take care of his ministry, serving Iraqis and raising oil production," he said.

Global majors are eager to get their hands on Iraq's enormous oil wealth which holds the earth's third largest proven reserves of crude, with more than 115 billion barrels of oil, after kingpin Saudi Arabia and Iran.

Ninety-five percent of Iraq's annual budget is made up from oil revenues and in recent months, as security in the war-shattered country has stabilised, Baghdad has been preparing to open up its oil wealth to foreign firms.

Last December Iraq launched a series of new international tenders for development of 11 oil and gas fields in a bid to ramp up the nation's lagging oil production.

That invitation came six months after the opening of the first round in which six oil and two gas fields were offered for development.

Iraq's pre-US invasion export ceiling was about 3.0 million barrels per day, but it now produces only about 2.2 million barrels a day, of which 1.6 million is for export, according to figures on the OPEC website.