Death of Danielle MITTERRAND, "Mother of the Kurds" 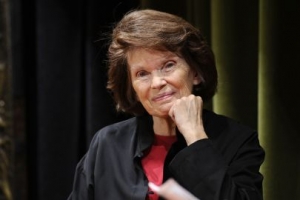 Danielle Mitterrand, former First Lady of France and President of the France-Libertés Foundation, died in the night of Monday 21 November at the Georges Pompidou European Hospital, to which she had been admitted last Friday for pulmonary problems.

Born on 29 October 1924, she joined the Résistance at the age of 17 and then devoted her life firstly to the struggles of the Left alongside François Mitterrand then, after his election in May 1981 to the defence of human rights, in France and throughout the world. Taking advantage of her position as First lady, she took up the defence of groups and peoples that were victims of dictatorships of the injustices of History and of Realpolitik.

As from 1982, she played an active role in support of the Kurdish cause, supporting the formation of the Paris Kurdish Institute to make public opinion aware of it and to “awaken consciences”. She then sent observers to the trials of Kurdish activists persecuted by the Turkish Army junta in the 1980s; attacked the genocide campaigns against the Iraqi Kurds carried out between 1988 and 1990 by Saddam Hussein’s regime; defended the Kurds of Iran at the time of the assassination, in Vienna July 1989, of their leader, Abdul Rahman Ghassemlou, by the Iranian regime.

After visiting the refugee camps of Iraqi Kurds in Turkey, survivors of gas bombing, she persuaded the French authorities to receive a thousand on the occasion of the celebrations of the French Revolution’s bicentenary. She then spared no efforts to make the Great ones of the world come to the help of the Kurdish people. To this end she made several visits to Moscow, Washington, and Bonn, jointly organised by the Kurdish Institute and her France-Libertés Foundation, with lectures and colloquia to make public opinion aware of the Kurdish tragedy. Her efforts contributed to the creation, in June 1991, of a “protection zone” for the some 2 million Kurds fleeing towards the Iran and Turkish borders following the First Gulf War.  She visited the refugees by “illegally” crossing the Iranian-Iraqi border and bringing them a substantial scholastic aid. Several hundreds of school text books were printed in France in Kurdish to cover the start of the 1991 scholastic year.

In 1992 she inaugurated the newly elected Kurdistan National Assembly.  During this visit, on the way to the martyred town of Halabja, her convoy was subject to an attack by Iraqi secret services, causing a number of deaths among Peshmerga protective escort.

In 1984, following the arrest of a dozen Kurdish Members of Parliament democratically elected for the Party for Democracy (DEP) in Turkey, she took up their defence by creating an International Committee for their liberation (CILDEKT) and conducted a large scale international campaign to make public opinion aware of their fate.

Considered “the mother of the Kurds”, Danielle Mitterrand made two more visits to Iraqi Kurdistan, in 2002 and in 2009, during which she was welcomed by all official honours but especially with great affection and gratitude. There are schools and roads named after Danielle Mitterrand in every Kurdish town.

A book of condolences will be opened at the Kurdish Institute for the Kurds and their friends who want to express their sympathy and testimony.

France-Libertés and the Kurdish Institute of Paris invite
all those who wish to pay a last tribute to Danielle Mitterrand
to meet on Thursday November 24th at 1 p.m.
on the Pont des Arts in Paris.

Public figures and anonymous individuals will meet at this emblematic place from which, on June 5th, 2010,
Mrs Mitterrand launched the Water Carriers Campaign for access to water for everyone.

Her coffin will be on view in the Batignolles Funerarium on Friday, November 25th, from 2 to 5 p.m.

The burial will take place at Cluny cemetery at 3 p.m. on Saturday, November 26th.